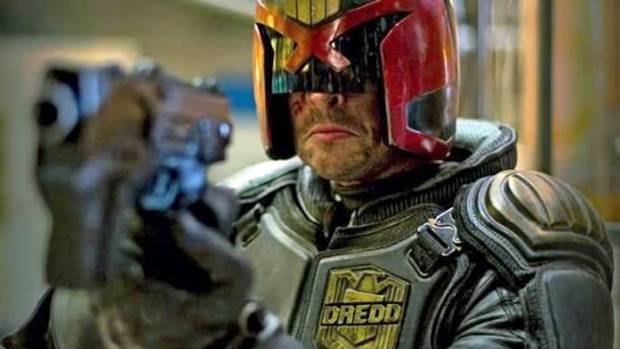 Fans are clamoring for a follow-up to 2012’s Dredd.

When it came out, Dredd was lauded for its over-the-top violence and its dark humor. The cries for a sequel have been so loud that even Judge Dreed himself – Karl Urban – has spoken out about getting a Dredd 2 underway. In an interview with JoBlo.com, Urban spoke of the passion of the fans to see him don the badge and helmet again.

“Wow. That’s a sweet compliment to get. In fact, there’s so much interest in that particular character and I would dearly love to have the opportunity to get in there and play that again. There are so many wonderful stories in the 2000 A.D./Judge Dredd canon that we’d be remiss not to have the opportunity to tell them. If it were up to me personally we would have been making Dredd 2 two years ago.

“The rights holders [Producer Brian Jenkins and Rebellion CEO Jason Kingsley ] are in their process of developing their show called Mega City One and we’ve had many discussions and the ball’s in their court. Hopefully, they get it together and are able to deliver more of what the audience wants and it would certainly be a privilege and a pleasure to be a part of it.”

There were reports last year that Urban would be in talks for Netflix’s Mega City One. It seems Urban is very much still game to play Dredd if the showrunners come calling. While it’s unknown if he will return for the series, Urban said that he is happy to have at least played the role once and happy for the film’s cult-classic status.

“Well, I can. I mean, I could see other actors portraying him and one day that is an inevitability. I would love to have the opportunity to play DREDD again, but if it doesn’t happen then I’m happy with the fact that we’ve made a film that has become a cult classic and that people have discovered over time.

“A huge part of the success of DREDD is in fact due to Alex Garland and what a lot of people don’t realize is that Alex Garland actually directed that movie.”

Urban giving props to Garland is a cool move. Garland – who wrote the screenplay for Dredd – has since done great sci-fi films as Ex-Machina and Annihilation. It would be cool to see Garland direct Urban in an episode of Mega City One some day.

Would you guys like to see Urban suit up again as Judge Dredd?