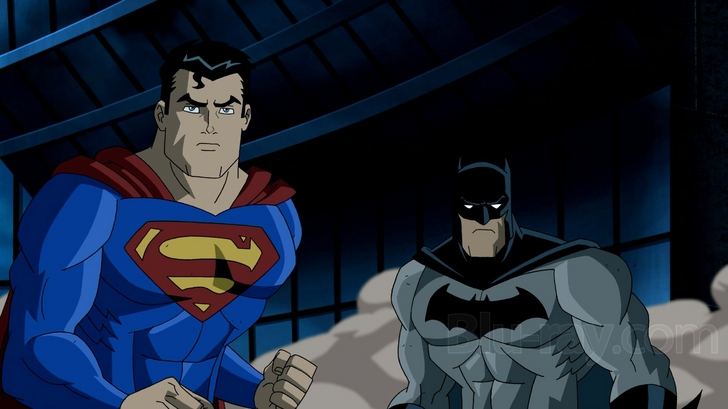 “A tale of loyalty and unlikely friendship featuring two of the most recognizable and popular super-heroes on the planet, SUPERMAN/BATMAN: PUBLIC ENEMIES pairs the Man of Steel with the Dark Knight. The iconic super-heroes unite when long-time Superman enemy Lex Luthor, now president of the United States, accuses Superman of a crime against humanity, and assembles a top-secret team of powerhouse heroes to bring Superman in — dead or alive. But after the Dark Knight Detective proves Luthor’s accusations to be baseless, the “World’s Finest” duo prepares to topple the corrupt president’s reign once and for all.” (DC Comics)

Imagine Michael Bay and Jerry Bruckheimer producing a Superman/Batman movie, with a really good story, directed by Brad Bird. That’s what Jeph Loeb essentially does in Superman/Batman: Public Enemies. For Superman and Batman to team up, it must be a grand scale threat. Well, it doesn’t get much more grand scale then a Kryptonian asteroid and the fall of President Luthor. This story is action packed. It starts off right from the beginning with the fight between Superman/Batman vs. Metallo, and continues right to the last fight with a Kryptonite injected Lex. Not only is the action great, but the character beats are superb. Loeb simply “gets” Superman and Batman. I love the contrast he sets up between the two characters in issue one, all of which stem from their viewpoints on their origins. Superman views his as a dream, while Batman sees his as a nightmare. Loeb cleverly asserts the two heroes’ relationship through their inner thoughts. There is great respect and admiration for each other. These two know each other as if they were brothers. They consider each other as friends, but would never admit it. Loeb’s references to other stories, such as Hush, and Kingdom Come make reading this book a pure delight.

Lex Luthor is President of the United States when Superman/Batman: Public Enemies begins, and he has no problem using a catastrophe to further his own agenda. This book features hero vs. heroes, as Lex Luthor’s government registered superhero team is tasked with bringing Superman and Batman in, when President Lex declares them fugitives. Duty to country Vs Loyalty to your superhero brethren. pits Green Lantern, Captain Atom, Powergirl. Starfire, Katana, Black Lightening and Major Force against Team Batman & Team Superman. The Battle royal between superheroes is essential “Civil War.” Jeph Loeb and DC basically did it a full 3 years before Mark Millar and Marvel did. Sure, the point of contention causing the battle may be different, but maybe the self proclaimed “House of Ideas” should rethink that nickname. In the midst of all the fighting, there are two key scenes where Batman and Superman, use their brains instead of their brawn to gain the upper hand. There’s a lot happening in this six issue story, but Loeb juggles the proportion of action and character moments, equally and expertly.

Ed McGuiness is not a bad artist. His work is just not my cup of espresso. When compared to the likes of Jim Lee, Michael Turner, George Perez, and John Byrne, his work seems more akin to instant coffee. His work is too cartoonish, and heavily influenced by anime. It seems better suited for the Johnny DC line of books, then the mainstream line. One major problem for me in Superman/Batman: Public Enemies, is that when featured on the same page, Superman and Captain Marvel, and Superman and Captain Atom, look like identical twins. Also, every character in this book has that over exaggerated “Jay Leno” looking superhero chin. It drives me insane. However, McGuiness did have some shining moments. He can definitely draw one hell of a fight. Standouts include the fights involving Metallo, the Kingdom Come Superman, and Lex Luthor. McGuinness’ best work comes in issue two, when Kingdom Come Superman picks up the 1966 Batmobile and readies to throw it on top of Batman. That looked spectacular. I also loved the scene with Batman and Superman squaring off against Hawkman and SHAZAM. The splash page of Superman grabbing Lex Luthor by the throat in the Oval Office, with Batman half heatedly trying to talk him down, looked brilliant as well. Credit also has to go to the colorist and inker. The darkened sky, and lightening striking really make the page stand out. My favourite cover of the story is issue #3. Batman and Superman hidden in the shadow of a dark alley, with Superman’s eyes red with heat vision, and a spotlight shining on Superman’s “Wanted Poster.”

Superman/Batman: Public Enemies was the first monthly comic book I put on my monthly pull list In fact, without this book, I probably wouldn’t have started my own podcast or joined Revenge of the Fans. It brought me back to the world of comic books and superheroes. As such, this book will always hold a permanent place on my all time favourites list. Batman and Superman have always been my favourite characters, but this book really calls to mind their personalities and interactions from the Bruce Timm/Paul Dini Justice League animated universe, which I love. The other benefit of reading this story as a trade, you won’t have to go through delays as I did when reading it monthly. Just as watching Pamela Anderson running down the beach in slow motion mesmerized a thirteen year old boy to keep watching Baywatch, this books story line entices and mesmerizes readers to keep reading this title long after this story ends.

Previous post Netflix Has Released This Jaw-Dropping Trailer For LOST IN SPACE!