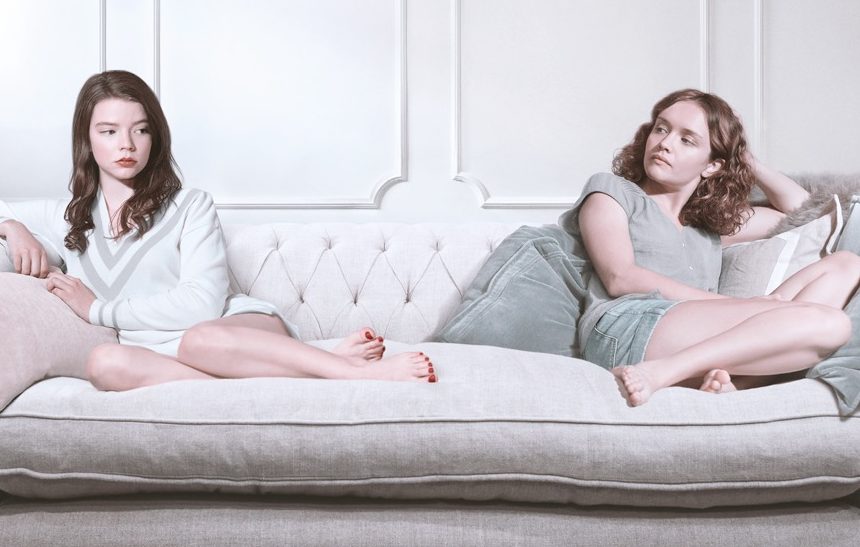 A Thoroughbred is a breed of horse that’s prized for its agility, speed and spirit. The directorial debut film from Cory Finley, Thoroughbreds has surely made its owner proud. After its Sundance premiere, Focus Features snatched it up for a reported $5 million dollars. Not too shabby, considering this movie was helmed by a first time director. Finley wrote the screenplay as well. I was surprised and impressed to find out this was a debut for him. The film is well written and terrifically cast. It’s a very polished piece also, which adds to the impressive meter for Finley. Each scene is tight, un-fussed and darkly humorous.

Thoroughbreds centers around childhood friends, Amanda and Lily; two rich, suburban Connecticut teens played delightfully by Olivia Cooke (“Me and Earl and the Dying Girl”) and Anya Taylor-Joy (“Split”). In the process of rekindling a strained friendship, they hatch a devious plan together. The juxtaposition of the girl’s personalities created an interesting, modern Thelma & Louise dynamic to the main characters. Adding Anton Yelchin, playing a local low-grade hustler, to that moody mix and it was an exercise of curiosity to watch the characters co-inhabit this world. He also stole every scene he was in. Even in a small supporting role, we are reminded that we truly lost a genius of an artist.

The tone of the film is a stylistic dark comedy full of satire especially illustrated through the characters of Lily’s mother and stepfather. I appreciated the dry humor. It is also invigorating to watch a film led by two, young women that isn’t about them fighting over a boy. It’s refreshing to see young female lead or leads (in this case) pursue other aspirations besides the affection of a boy to validate their self-worth. These girls don’t seem to lack in any self-esteem and they are sharp. Watching Lily and Amanda’s friendship deepen on-screen, it immediately brought back memories of my friendships during that age. A big kudos to Cory Finley for writing young female characters that are smart, powerful, and driven and not whiny, bratty or boy-crazy.

The film’s scoring, composed by Erik Friedlander lended beautifully to help bring a world full of detached people to life. The weird, screwy soundtrack helped move the story along where there was otherwise nothing much happening on-screen. The unique sound scoring was one of the first things I noticed while watching the film. The same praise can be given to the production designer, Jeremy Woodward, and the cinematographer, Lyle Vincent. The production design and camera movement matched tastefully with the style of the film and the messed up world they accomplished to nail.

I’ve had some time to process the film’s nuances. Overall, I think I missed the horse metaphor in the film in general, if there were any. I was not quite positive how that wove into the whole story in general. Perhaps it was a tool to illustrate how brutal and emotionless Amanda can be. By the end of the film, I had to think back and wonder if this was about Lily and Amanda’s friendship at all. If you’ve seen the film, you’ll know what I mean. The last line of the film reminded me of the spinning top ending in Inception. No spoilers, but in a dark twist at the end of the film, you can’t help but wonder if everything you had just seen was truthful or smartly manipulated by the girl you didn’t see coming.

Next post Super Mario Bros. On The Big Screen: How It Can Work