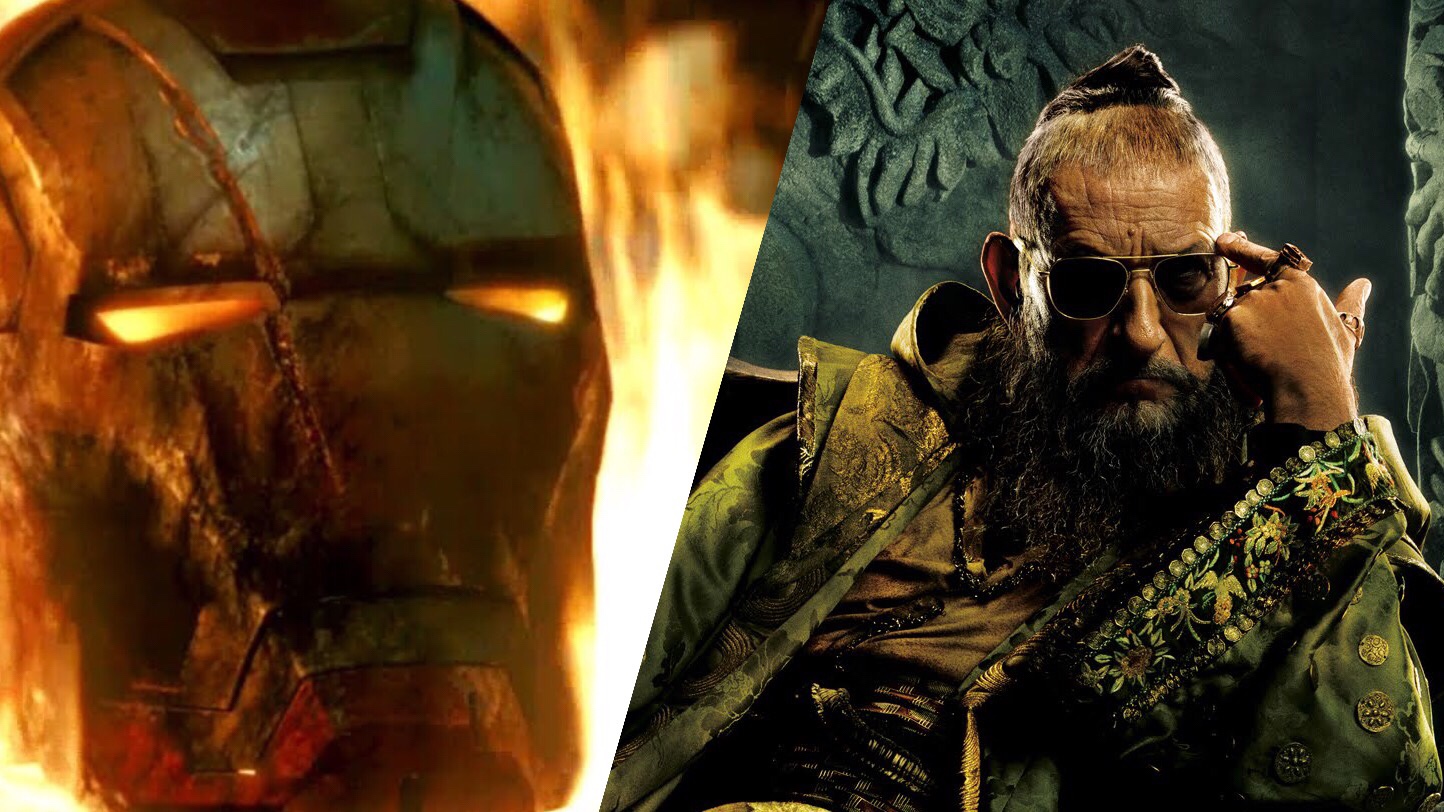 Marvel Studios doesn’t take risks, right? So what do you do if you’re playing it safe? How do you follow up The Avengers, the 3rd-highest grossing movie of all time? A superhero spectacle full of gods and aliens and explosions and war! How about another just like it?

If we’re following the pattern, Iron Man 3 should be something amazing! Something peppy, something snappy! Maybe Iron Man should go to space!

Oh, and like all the good superhero films, the main hero has debilitating post-traumatic stress disorder. Kids LOVE that!

That anxiety drives Tony to question everything. Since the last time we saw him, Tony has been very busy. He’s been tinkering in his garage, creating new Iron Man suits for every occasion. In the final moments of The Avengers, Tony had just rushed Mark 7 to final. Now, we find out he’s been spending so much time in his garage that he’s just put the finishing touches on Mark 42.

In order to fully grasp what that means, let’s look back at the other Iron Man movies. Tony’s garage isn’t just another reused set. It has symbolic meaning. Tony’s garage is a place of solitude and honesty for Tony.

Our first exposure to the concept of Tony’s safe space is in the morning after one of Tony’s trysts. The woman wakes up to an empty bed and starts wandering around Tony’s Malibu mansion. A warning beeps and the sign goes red. “This area is restricted” JARVIS warns Christine Everhart as she tries to enter.

Even Obadiah Stane, before he was outed as a murderer, wasn’t welcome in Tony’s garage. Pay attention to the scene in Iron Man where Obadiah brings Tony bad news from the board meeting along with a pizza. Obadiah asks if he can take a peak at what Tony’s working on downstairs and he’s met with a prompt “goodnight, Obi” because he knows he’s not welcome there.

So what about the SHIELD presence at Tony’s house in Iron Man 2? Tony doesn’t fully connect with Phil Coulson until after it’s too late, so it’s not like he’s a trusted member of Tony’s inner circle, right?

Well, if you read my piece on that film, you’ll see that Iron Man 2 is actually about the reframing of Howard Stark’s legacy. In Iron Man, Tony rejects his father’s weapons dealing past. In Iron Man 2, Tony discovers that now that he’s truly trying to save the world, he has more in common with Howard Stark than he originally thought. To match this symbolical expansion, in Iron Man 2, Tony literally expands his garage to accommodate his father. Tearing down walls and such. There’s a montage with a sledgehammer and everything.

Now, cut to Iron Man 3 and Tony has been spending more time in his garage than ever before. He’s cut off from everyone. Through dialogue we find out that Pepper is somewhat aware that Tony has been working on new armors, but she has no idea how prodigious he’s been. Rhodey isn’t hanging around since he’s gone full time War Machine, ahem… Iron Patriot. Even Happy Hogan has moved on, taking on a new challenge as Pepper’s head of security.

Nobody needs Tony and everybody is dealing with some form of new identity, except Pepper. Her success only further drives the point that Stark Industries doesn’t need Tony Stark.

And Tony Stark definitely doesn’t know. Especially not in this movie.

So when the Mandarin blows up Tony’s garage, he’s kinda doing Tony a favor. He “considers himself a teacher,” after all. The destruction of Tony’s garage strips Tony of everything he knows about himself. So Tony is forced to admit that he can’t keep doing what he’s doing.

And then he wakes up he’s in Rose Hill, Tennessee, with nothing but his will and his wits to get him through. The only armor he has with him isn’t powering up and JARVIS is out of commission. Tony even borrows a garage, and that garage belongs to a little kid with no parents in sight. As if that symbolism even needs to be explained.

As he works to reclaim his identity, he’s got to figure out how to save the day as Tony Stark, not as Iron Man. I guess Rose Hill, Tennessee just doesn’t have the resources of an Afghan cave with a box of scraps.

The other theme of this film is that “we create our own demons,” which is perfect for Tony Stark. He’s been repenting of his own actions ever since we met him. Tony Stark armed his own assassins in the first film, Ivan Vanko was seeking vengeance for Howard Stark’s supposed betrayal of Anton Vanko in Iron Man 2, and (a few films from now) Tony Stark will create Ultron.

When Tony Stark makes mistakes, he makes them like nobody else.

So combine the themes of false identities and self-destruction together and you get Iron Man 3’s version of the Mandarin. The Mandarin, a character that would be incredibly difficult to adapt to modern culture, is instead a false face for Aldrich Killian, yet another weapons dealer. Even the Mandarin attacks are wearing a mask, since they aren’t really attacks, but failed Extremis treatments.

This movie goes deep on the idea that everybody is hiding from something.

A few years after this movie came out, it was revealed that Shane Black wanted Maya Hansen to be the villain of this film, but Ike Perlmutter shot down the idea since “female toys don’t sell.” Do you realize the weight of that idea?

In a movie about creating your own demons, for Tony Stark’s greatest threat to be a woman he once used and discarded is truly poetic.

In the climax of this film, Tony’s creations fight Killian’s creations, and it’s all about Tony’s creativity instead of brute force. Tony hops from armor to armor as each one fails, making it clear that it’s not Iron Man that’s in this fight. It’s Tony Stark.

And when Tony Stark is out of armors, Killian stands before him ready to make the final strike.

“No more false faces” he says, as Pepper Potts clocks him with a metal pipe. And, as if this movie couldn’t use any more symbolism, Pepper is targeted by an Iron Man armor, and not just ANY Iron Man armor. This Iron Man armor is in the original series, denoted by the red and gold paint job and circular arc reactor on its chest.

If I’m not being clear: Iron Man is in danger of killing Pepper Potts and Tony is powerless to stop it. The symbolism runs THICK in this movie.

After Pepper dispatches the rogue armor and takes out Killian for good, Tony order JARVIS to self-destruct the remaining suits, showing Pepper that he is done hiding behind his armor. What’s more he finally has the arc reactor (and the shrapnel it was keeping at bay) removed from his chest. The shrapnel that was killing Tony Stark gets fashioned into necklace that he offers to Pepper and the arc reactor that “solved the riddle of his heart” gets tossed into the ocean where his garage used to be.

And as Tony Stark drives away, he realizes who he is.

“So if I were to wrap this up tight with a bow, I guess I’d say my armor was never a distraction or a hobby. It was a cocoon. And now I’m a changed man. You can take away my house, all my tricks and toys. One thing you can’t take away…”

Join us next week when talk about Thor: Dark World and Loki.

2 thoughts on “We Create Our Own Demons: How Ike Perlmutter Robbed IRON MAN 3 of Tony Stark’s Greatest Villain – Road to INFINITY WAR – Part 7”