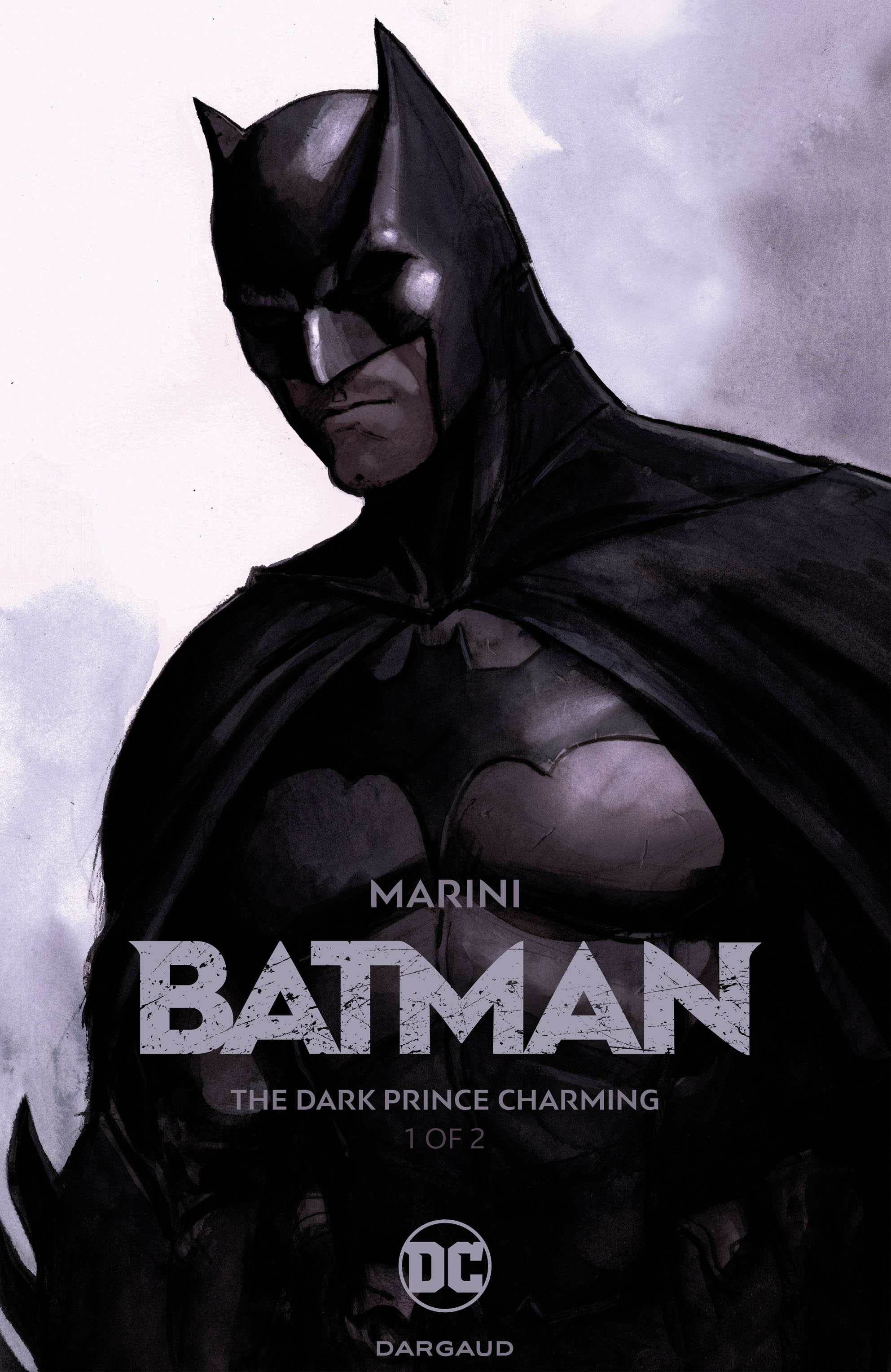 “Acclaimed European comics master Enrico Marini (Eagles of Rome, Le Scorpion) makes his American comics debut with an original, two-part graphic novel starring the Dark Knight! What secret connection do both Batman and The Joker share with a strange and mysterious young girl? After she’s kidnapped by The Joker, Batman must plunge deep into the underworld of Gotham City and race against time to find out where she’s being held. The stakes are high, and for Batman, it’s personal!” (DC Comics)

When I hear that DC Comics is handing one of my top two favourite superheroes to someone who has never written an American superhero comic before, I’m curious as to what the result will be. Will the creative talent take Batman in an unexpected direction, putting their own stamp on the character, or will they play it safer and give us a new story, with all the familiar and comfortable Batman trappings we all love. The answer when it comes to Batman: The Dark Prince Charming Book One, written and drawn by Enrico Marini, is a little bit of both. The book starts off with a shocker. A package is delivered to Wayne Manor. When Bruce opens it, the gift is from The Joker, confirming to Bruce Wayne that not only is the Joker alive, but he knows that Bruce Wayne & Batman are the same person. In all my years of reading Batman comics, I’ve never read a story where Joker knew Batman’s identity. There may be stories out there, but this is a first to me. This book had my attention anyway, but when this was revealed on page 3, to quote Justice League marketing, I was “All In!” There’s no indication of when The Joker found out this information, or how. I hope that’s just the writer stringing us along and leaving some reveals for book two, as these were definitely questions I was asking myself, which I would like answered.

Batman: The Dark Prince Charming Book One, then shifts briefly to a scene of Batman chasing down The Joker and his goons after a jewelry store robbery. While he retrieves the diamonds, The Joker and some of his goons get away. Back at The Joker’s hideout, Harley is furious that Joker lost her present. While they look for replacement jewels to steal, Joker becomes fixated on a news report of Bruce Wayne’s playboy lifestyle coming back to haunt him. The story then flashes back 3 months to a former waitress named Mariah Shelley, confronting Bruce at Wayne Manor, calming that years ago, the two shared more then just a few kisses and that interaction spawned a daughter named Alina, who is also present. The girl has an affinity for Batman, as evidenced by her hand made doll, and acts just as brash and stubborn as her supposed father. While Bruce is kind and welcoming with the girl, he tells her mother he doesn’t recall their encounter and for that matter, doesn’t even remember her. When Mariah states she is suing Bruce, demanding a public admission of paternity and $100 Million in child support, Bruce tells her to get a good lawyer, before giving her the cold shoulder. The book transitions back to present day, where The Joker stages a car accident, kidnaps Alina, and plans to hold her for ransom, so he’ll have more than enough money for Harley’s birthday diamonds. The book ends, with Batman hunting down and brutally beating Joker’s known associates, in an effort to learn of his and Alina’s whereabouts.

It was cool to see this story told in a non linear format at certain points. While that has become more common in superhero films, and is one of my favourite parts about both Batman Begins and Man of Steel, I still find that it is a rarity in comic book story telling. Bruce Wayne/Batman being a father is nothing new to the mythos, when you consider he essentially adopted, Dick Grayson, Jason Todd and Tim Drake. He’s also got a biological son in Damien Wayne and if you count pre-crisis continuity, a daughter with Catwoman, named Helena Wayne. What’s different and interesting about Batman: The Dark Prince Charming Book One’s take on that idea, is that it comes about as a consequence of Bruce Wayne’s public “billionaire, carefree, aloof, playboy” persona. This aspect of Bruce’s character, is often glossed over in most Batman comics, so it was refreshing to see it gain some resonance here. We all assume that Batman is too smart to get caught up in the façade, but he’s got to make it look convincing, so it’s possibly, that one time, he got drunk, or lost himself a little too far in the act. The book does confirm whether Bruce is or is not the father. While I will not spoil that here, I’ll throw another candidate into the ring, The Joker himself. Firstly, there are words and phrases in Mariah’s private conversations with her lawyer and daughter, that suggest this is all a ruse, nothing more than a cash grab on her part. Then there’s the way The Joker treats the little girl. He orders her pizza, tells her stories of his childhood, and makes her balloon animals, all to make sure she is comfortable and feels assured that he won’t harm, or kill her. That isn’t normal Joker behavior, when it comes to his victims/hostages. There’s also the shape that Joker paints with his makeup on his eye, which matches a birthmark that the child has. When you guys read the story, or if you already have, let me know, if you share my theory about the Joker possibly being the father or not.

In terms of personality I feel Batman takes his cues from his most recent portrayal. I definitely see Ben Affleck’s Batman as a reference point, especially with how obsessed and angry he gets when Alina goes missing and in his quest to find the Joker. It’s very reminiscent with how laser focused and unhinged he became in his hunt for Superman in BvS. The difference being, in this book, Batman’s reactions and behavior was justified. In BvS, I didn’t agree with him at all. The Joker on the other hand is clearly a cherry picked version of several different versions. He’s got the chaos and murderous streak of Heath Ledger’s version. Much like that version, he kills his own crew members, without hesitation. This Joker has that weird love and affection for Harley Quinn that Jared Leto had in Suicide Squad, and he has that playfulness that Mark Hamill’s version of the character had. This Joker doesn’t miss a chance to make a joke, before or after a crime. I’d mention Harley Quinn, but her character was relegated to nothing but background fodder here.

Marini’s art was as strong as the story that goes along with it. I’ve never seen his work before this, but other artists he reminds me of, include Shane Davis and Lee Bermejo. Funny thing is, there’s even a little bit of Tim Sale in a few panels too. If Batman and The Joker’s personality mimic other media incarnations of these characters, so to does their artistic appearance. I’m going to sound like a broken record referencing Affleck’s Batman, but I absolutely see him in these pages and panels! Maybe my eyes are playing tricks on me, or maybe my mind is associating Affleck automatically with the character because he’s the most recent on screen version. The Joker meanwhile has the Heath Ledger cut smile look, with a little bit of the Arkham video games flavor to it. Oh and certain markings on his face makeup, make him a perfect fit for KISS, if they ever need a new, or replacement member The pot luck of references to live action incarnations of the Batman world, continued well beyond our main characters too. Two key action pages took their cues from film. The scene where Batman chasees The Joker and his get away vehicle, are essentially an amalgamation of The Batmobile chasing the Joker scenes from both The Dark Knight and Suicide Squad. In TDK, the tumbler chases a transport truck The Joker stole, as he shoots at Batman from the truck with a bazooka. In Suicide Squad, Batman leapt from the Batmobile onto Joker’s car, which ultimate went for a swim. This book accomplishes all these moments, paying homage to those films, but putting their own spin on these scenes. Another scene that is more directly transplanted from film to comic page, is Batman questioning one of Joker’s clowns, while sitting across from him in the GCPD interrogation room. As good as it looks, it’s nowhere near as awesome as the scene in The Dark Knight! I’m not sure anything could surpass it. The one page that didn’t feel right to me, was the Batman/Gordon rooftop page. In it, instead of smoking his trademark cigarette, we see Com. Gordon vaping, while waiting for Batman’s arrival. I know there’s a need to do the “in” thing, or keep up with modern trends, but Jim Gordon vaping looks stupid! Batman even acknowledges that by saying so, when he sees Jim doing that.

With this book being Book One of a Two Book story, Batman: The Dark Prince Charming is off to a great start. Provided Marini doesn’t completely drop the ball in book two, at the very least, this series has the potential to be a solid modern day Batman story. If he answers some lingering questions and or, delivers a follow up as good as this, it may be considered a modern classic. The ultimate success of this first volume, is mixing classic Batman story tropes, with surprising new twists. Also, being able to balance a character driven story, with the action and intensity, expected of superhero stories. A definite must buy for all Batman fans!