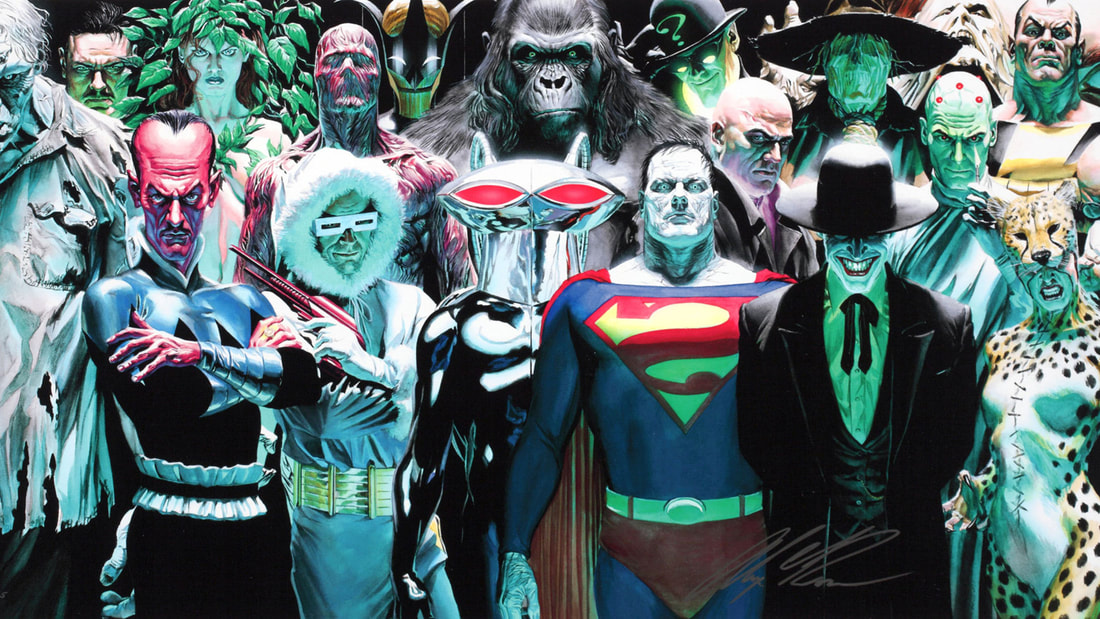 Mario-Francisco Robles
Facebook
Twitter
Pinterest
LinkedIn
Read Time:9 Minute, 35 Second
[This Report On The Legion Of Doom Was First Published On The El Fanboy Website On 11/28/17. Now That Revenge Of The Fans Is The Home For My Exclusive Reports, I Figured I’d Bring It On Home For Easier Perusal. It’s Also Been Updated To Include The LOD Clip From Justice League]
It’s been 11 days since Justice League began its theatrical run around the world. In that time, it’s been a total roller coaster ride for both fans and Warner Bros, as the film’s reception has come into focus. After years of hype, tons of behind-the-scenes drama, predictions about how it’ll fare critically, and discussions about whether or not it will be the first film in the new DC Films Universe to crack the ballyhooed billion dollar mark, there are now actual answers to those questions.

So where do we go now? How is the studio assessing the damage? What’s the plan moving forward? These are the new questions that demand answers, now that we’re officially in the post-Zack Snyder, post-Justice League era of DC Films.

Some, like my friends over at Batman-On-Film, are firm in their belief that Warner Bros. is going to “blow the whole thing up” and reboot everything. Others are optimistic that DC Entertainment is going to stay the course and give us films that truly live up to their potential.

​I, myself, don’t know what to think. As someone who’s exhaustively versed in the history of DC and Warner Bros. (Seriously, CLICK HERE for an in-depth history lesson), I can’t help but think of the past as I try to predict what the future will hold.

See, back in the mid-00s, Warner Bros. was set to launch a shared universe long before Marvel Studios entered the picture. They first conceived of a “Batman vs Superman” film back in 2002, and then pivoted away from that when Superman Returns misfired and Batman Begins triumphed. At the time, the studio went to Christopher Nolan, said “Do whatever you want with Batman,” and the director went and put the character off on his own island where he couldn’t interact with the rest of the DC Universe. This put WB in a bind, as they still craved a shared universe, yet no one could deny that Nolan turned Batman into the King of Superheroes during his Dark Knight Trilogy.

At the time, after Green Lantern flopped and Justice League Mortal got scrapped, Warner Bros. was forced to wait until Nolan was done with Batman in 2012 before they could take another crack at a shared universe with 2013’s Man of Steel.

Now they’re at a similar fork in the road. Justice League today is what Superman Returns was then- a pricey misfire. So are they going to go to their current crop of filmmakers, like Patty Jenkins, James Wan, and Matt Reeves, and give them the same offer they gave Nolan? My BOF buddies, Bill and Rick, seem to think so. But I just can’t see Warner Bros. putting their shared universe on the shelf again.

Something that makes the outlook very different now than it was when SR stumbled out of the gate is that they’ve already got Aquaman in the can and Wonder Woman 2 is an absolute certainty. So the studio is already way too invested in this current continuity to simply let the directors reboot them and cut all ties to Snyder’s old DCEU.

With all of this in mind, I reached out to my sources over at Warner Bros., and I’ve been bugging them for anything they can tell me about what the studio is thinking about the future of the DC Films Universe.

For starters, they say things are relatively quiet right now. On some level, they’ve known for a while that Justice League wasn’t going to be the monumental smash hit they had once envisioned, so its dismal showing at the box office last week wasn’t exactly a shocker. Using very fitting terminology, they say that “there is hope” about the film’s legs, though, based on the aforementioned gentle second weekend drop. They also note that “the social media interaction has been good” for the film, which adds to their sense that the movie could put up some respectable numbers these next two weekends and inch towards at least breaking even. It also points to the fact that they’re un-phased by the negative backlash from hardcore Snyder fans.

While they couldn’t say, with certainty, what the future holds since the studio plans on being quiet about the DC slate for a bit, they did mention something that could be very, very telling:

They’ve taken note of the buzz around the Legion of Doom post-credit sequence, and it looks like they may use the popularity of that concept as the connective tissue for the next few DC films.

In case you need a reminder, the post-credit sequence in question can now be seen right here:

You may have noticed that there’s been an awful lot of chatter about Joe Manganiello’s Slade Wilson, aka Deathstroke, in the last few days. The studio has allowed him to release a high-res image of himself as the character, and the once tight-lipped actor has had his lips loosened so that he can keep the hype going.

None of this is a coincidence. My source says it’s part of a calculated effort to get people focused on the Legion Of Doom.

“Legion of Doom is happening. Not an LOD movie, but building towards the team. Watch Manganiello. He has pretty much been blatant.“So they want to build the team, but they’re not planning a movie? I asked for further clarification, and here’s what I was told:

“They’re working on something cool for SDCC [San Diego Comic Con] 18, related to LOD. They want to continue planting seeds and building momentum for the team. Things will be generally quiet on the DC front until Aquamanhype begins, but I can tell you that there will be another LOD tag at end of that.”

And then, just like that, my little birds flew away, leaving me to piece together what this intel means. And I think I’ve figured out what the tentative plan is.

In Batman v Superman: Dawn of Justice, Zack Snyder and Chris Terrio began planting the seeds for Darkseid. That’s because the original plan saw Justice League as a two-part epic: The first part would center on Steppenwolf’s efforts to bring Apokolips to earth, and the second part would pit our heroes against Darkseid. Now, it should be obvious to anyone who saw Justice League that part of the film’s massive overhaul was to completely change course from that original plan. To borrow a video game analogy, Steppenwolf got promoted from Mini-Boss to Final Boss, and nearly all of the Darkseid buildup ended up on the cutting room floor save for one direct reference.

To many, it seemed like Justice League would be stripped of any foreshadowing of the future, since the studio had seemingly lost all faith in the film and was about to dump it into theaters with head-scratchingly poor CG. But then they did something interesting. Mere days before releasing the theatrical cut, after several rounds of special screenings had taken place, they suddenly slapped a Legion of Doom tag scene onto it. It’s something Snyder had shot last year, back when Justice League was still seen as a massive launchpad for future DC films, and it was suddenly attached onto the theatrical cut as the sole tease for the future.

What seems to be happening now is that DC Entertainment wants to build up the Legion Of Doom concept- that there’s a group of mega-villains operating in the shadows- and use them as the connective tissue for the next few DC movies. Almost as the inverse of what Marvel did when they peppered all of their Phase One films with teases for a team of heroes, DC wants to pepper their next wave of films with teases for a team of villains. But rather than build to an Legion Of Doom movie, I think the team could end up the central focus of the next couple of far off team-up movies: Flashpoint, Justice League 2, or both.

How that would work is anyone’s guess, as those scripts are still being worked on, and Justice League 2– in particular- is a very far off priority at the moment. But it seems like the current plan is for the next few films to contain tags that show the Legion of Doom adding to its ranks before delivering a big payoff down the line.

It’d be a smart move, in many ways. Darkseid would’ve added to the negative perception that many of DC’s villains have been way too CG-heavy and over-the-top. A team of gritty, tangible villains (Lex Luthor, Deathstroke, The Joker, et al) combined with more super-powered- yet humanoid- baddies (Reverse-Flash, Black Adam, etc) could be the perfect foil for the Justice League in a future team-up. And, considering Marvel Studios is going to be plastering Thanos everywhere these next few years, Darkseid may have ended up looking like a knockoff- ironic, considering he came first in the books.

Something like this would also cushion the blow when another actor takes over as Batman once Affleck’s departure is official. As I said in my scoop from two weeks ago, the plan is to surround the next actor with familiar faces like Jeremy Irons and J.K. Simmons. If the tag on The Batman ends up having Jared Leto’s Joker joining the Legion Of Doom, it’ll further smooth out the transition from Affleck to the new actor, keeping this Batman firmly connected to the DC Films canon.

It should be fascinating to see how this all plays out. Unfortunately, we’re going to have to be super patient. As my source said, the next glimpse of the Legion Of Doom won’t come until next year, and the company is still piecing together exactly what the future looks like. The endgame is unclear, but what is clear is that they want to use the Legion of Doom to get there.

So strap in and sit tight!