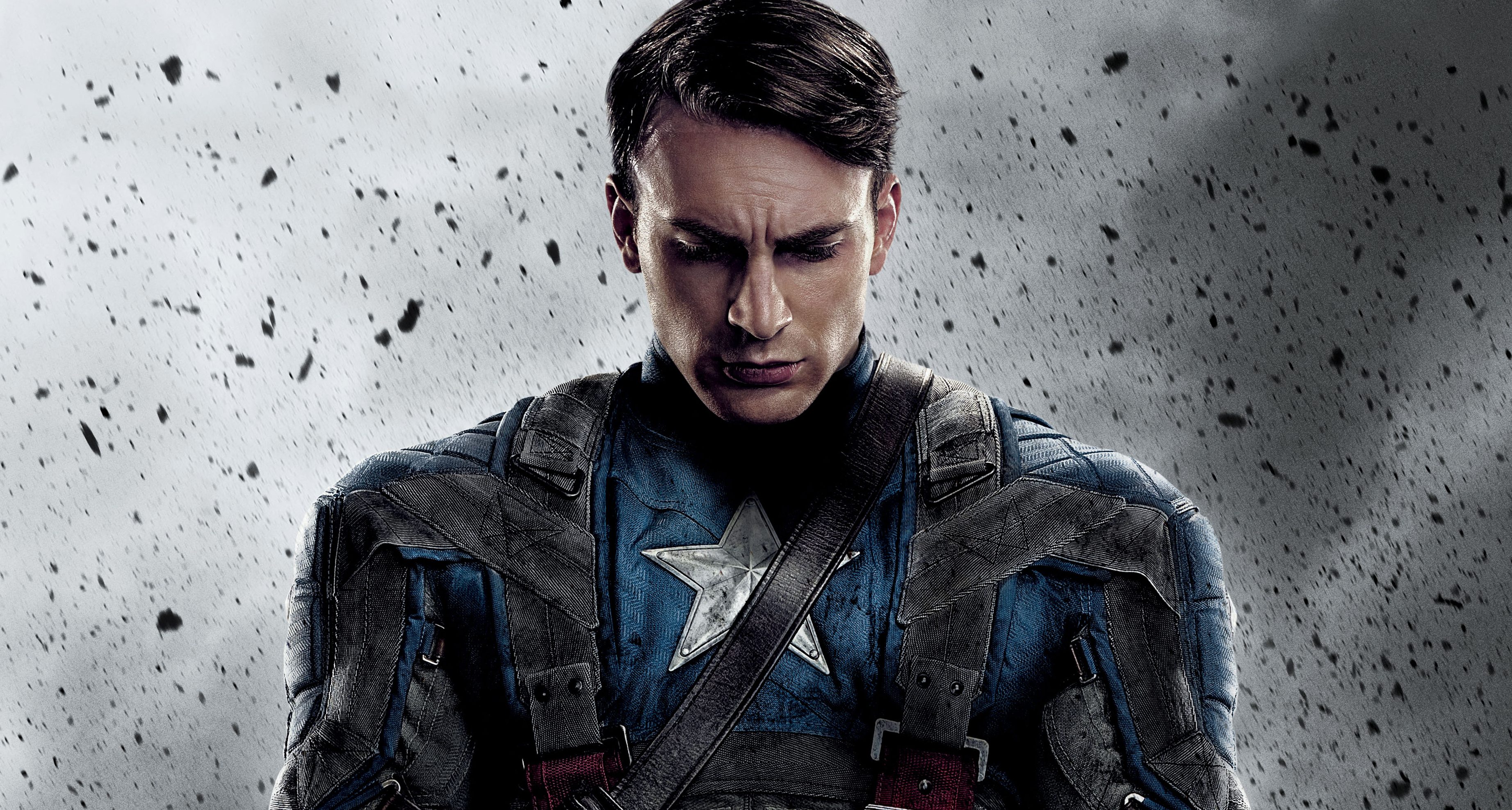 “How in the world are they going to do Captain America? He’s perfect and boring and who wants to watch two hours of some goodie-two-shoes in that ridiculous costume?”

At least that’s what they said before we saw the movie. But we were wrong. Boy, were we wrong! Marvel took a man with wings on his hat, bright red pirate-boots and (for some weird reason) blue scales and made him into one of the biggest box office draws of the last ten years.

And why does it work? Because they got Steve Rogers right, right from the start.

In the first scene where we meet Steve Rogers he’s trying to enlist, and that scene tells us everything we need to know about who Steve Rogers is. We get two images, a foreground and a background. Let’s talk about the background details first.

During the interview we find out that Steve’s father died from mustard gas, which means he would have died from an attack before the end of World War I in 1918, and since Steve’s July 4th, 1918 birthday is right there on the form, we know that Steve grew up without him. Then we find out Steve’s mother was a nurse who died after she caught tuberculosis from one of her patients.

While single parents are much more common today, in 1920s America it was rare for a married woman to work while raising a child, so it’s reasonable to assume that she never remarried and raised Steve by herself. In Winter Soldier we see a flashback to Steve’s solemn return home after his mother’s funeral. Bucky, Steve’s only friend, moves a brick out of the way to reveal the key to Steve’s apartment.

Just think a little bit about the picture it paints of Steve’s life. There was no welfare in that time. I bet that key’s there because Steve’s mother would have gotten up every morning, sent Steve off to school, and locked up on her way to work, leaving little Steve Rogers coming home alone to that empty apartment every day.

When you think about it, Captain America probably got some of his trademark sense of duty from his hardworking single mother, who worked to put food on the table until she died and left Steve an orphan around 1936.

Being an orphan is already sad enough, but then there’s the health issues. If you pay attention to the Steve’s form, the illnesses listed would be a constant source of trouble. Asthma, anemia, easy fatigability, and heart problems stick out. The person described on that form would get the wind taken out of him trying to best a flight of stairs.

Can you imagine what life would have been like for a fatherless weakling like Steve Rogers in a classically macho 1920s world? We know from the dialogue that Steve got regular beatings. Beatings we know he was physically incapable of defending himself from.

But now let’s forget about the background and talk about the foreground of that enlistment scene. That victim of circumstance I just described is in stark contrast to the character of Steve Rogers himself.

Even though he’s weak, made to stand there in his skivvies next to all those burly enlistees in their prime, he’s not intimidated. He’s ready to fight. The papers talk about the high body count of the war. “Kinda makes you think twice about enlisting” another man says. Steve, determined and on his fourth enlistment attempt simply says “nope!”

After he gets rejected again, he consoles himself by standing up to the bully in the alleyway. He gets knocked to the ground, gets back up again and says “I could do this all day” because that’s what Steve Rogers has been doing his whole life. Standing alone against the world.

And that’s the foundation of the whole movie right there. Just change out the players and you’ve got some version of every scene for the rest of this film.

The enlistment officers reject him. His fellow SSR recruits reject him. Even after he becomes a super-soldier, Colonel Phillips rejects him. He finally gets to Europe and catches up to the 107th infantry, they reject him too.

Colonel Phillips calls him “a chorus girl” and the battle-worn soldiers who know what war is really like call him “tinkerbell.” To be fair, half their division, including Steve’s only friend Bucky, have been captured 30 miles behind enemy lines.

It’s in this moment that Steve wakes up to the possibility of what he could accomplish, and it’s not because he wants glory, it’s because there are people who need his help, and no one is going to do something unless he does it. Duty, responsibility, and solitude. These are the things that drive Steve Rogers at every moment.

Red Skull is a perfect counterpoint to Captain America. Of course there’s the whole fact that they have the same powers and they’re both on opposing trains on the same propaganda track, but that’s only part of what’s interesting here.

“I have seen the future, Captain, there are no flags.” he says, and from what we know 20 movies in, he’s right. Red Skull is telling Captain America what he already fears.

This scene is just oozing with subtext. “You’ve got no idea” Captain America says as he socks Red Skull on the jaw, calling back to the staged version he’s done over a hundred times with a fake Hitler. Except this time, it’s Red Skull and he’s for real. Red Skull responds with matching force and hard reality.

“You are deluded Captain, you pretend to be a simple soldier, but you are afraid to admit that we have left humanity behind.” Red Skull tosses his mask in the fire, mocking Steve Rogers to do the same, to admit he does not belong in this world.

And when you think about it, Red Skull is right. Steve Rogers is fighting for a world he has no place in. The only place he belongs is in battle. The only time when Steve Rogers had a purpose is when he’s fighting in World War II.

Even Ultron could see it. “God’s righteous man, pretending you can live without a war,” followed up by a lament that he can’t actually throw up in his mouth, followed up by a Scarlet Witch fever dream about Steve’s glory days and what used to be waiting for him on the other side of the war: Peggy Carter.

Peggy Carter is a welcomed interruption to Steve Roger’s existence. They orbit each other from the moment they meet. Her gender and his frailty make them both unwelcome in a military that sees no value in them. And that’s the connection that drives them together.

To Steve, she’s offering something that he’s never had, a place in the world to belong after the fighting is over. She’s his salvation from the solitude he’s been hiding behind his whole life. All they have to do is make it through this war.

But we know it doesn’t happen.

In that last scene before the plunge, Red Skull is dead and Steve’s the only one left alive on that plane, alone and in the clouds. In order to protect the world, Steve makes the choice to die alone. Steve says goodbye to Peggy by recounting the promise they never could keep.

“I’m gonna need a rain check on that dance” he says. And they banter back and forth, pretending to make plans. The symbolic and the literal meet as Steve is cut off mid-sentence by a burst of static that can only be Red Skull’s flying wing crashing into the ice with Captain America inside.

And that’s the real tragedy of Captain America. It’s not that when he wakes up 70 years later he’s in a world he doesn’t recognize. It’s not that he’s alone. He’s always been alone. It’s that by sacrificing himself, by plunging into the ice he’s missed his one chance at being saved from being alone.

Steve Rogers has always been alone.

Come back next week when we discuss The Avengers.