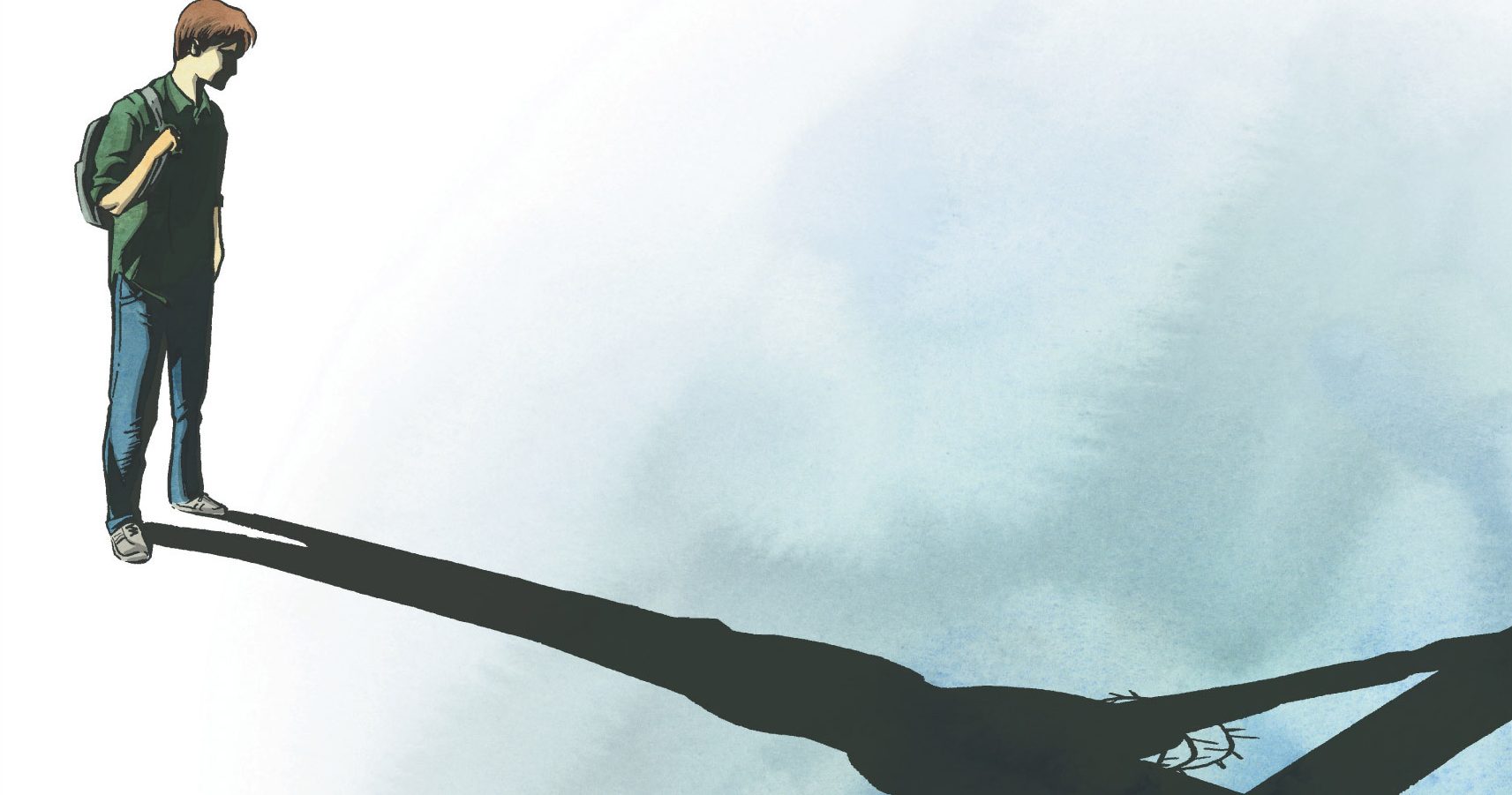 “American Jesus Volume 1: Chosen follows a twelve-year-old boy who suddenly discovers he’s returned as Jesus Christ. He can turn water into wine, make the crippled walk, and, perhaps, even raise the dead! How will he deal with the destiny to lead the world in a conflict thousands of years in the making?”

The draw for me to read American Jesus Vol 1: Chosen, was because it was written by Mark Millar.  Whether it be his work for Marvel, DC, or his other creator-owned work I’ve read, he’s quickly become one of my favourite comic book writers.  Half way through this book, it feels as  though we’re going to get a 21 Century telling of the Jesus story we all know.  For a bit, I was thinking that this was going to be the “Smallville” for Jesus in a way. Partly because one of the first story beats we see, is Jodie getting hit by a truck, in an effort to save a dog from getting run over. This scene calls to mind a scene from the Smallville, where Clark gets hit by, Lex’s out of control car. Much like Clark, Jodie ends up with not even a scratch on him. I wonder if Millar had Smallville in mind at all when writing this!?

We had modern-day stand in’s for the returned Jesus, in Jodie Christianson. His Earthly parent’ names have allusions to their biblical  counterparts Mary and Joseph. In case the title of the book, or the cover art doesn’t convince you, Millar goes out of his way to hard sell you on the Jodie is Jesus angle, when his mom essentially spells it out for him, before remarking that he she and his “father hadn’t had sex. In fact, their marriage was all for show, orchestrated by the church, so they could raise Jodie in a proper home, and so people wouldn’t start asking questions, if and when, his abilities manifested.  We had a requisite stand in for Mary Magdalene, named Maggie Kane, the first female in his group of friends. One of his friends was actually named Peter. Just as the Biblical Jesus did,  Jodie matched intelligence with his supposedly superior intellectual elders. There’s a great moment where Jodie is in a class room of teachers, where he is, pardon the pun, schooling them on a wide range of subject. This moment perfectly parallels the moment in the bible when Jesus was twelve and lectured the scribes and the Pharasess. Millar doesn’t take for granted that all his readers are Christians, or even religious, so there is expository dialogue making the necessary connections to biblical events.

Up to this point, American Jesus Vol 1: Chosen seems simply a modern twist on a story, we know, what makes it interesting is the modern context.  We see Jodie cure the lame, heal the sick, and even raise the dead. Sure, the lame in this story, is the father of one of Jodie’s bullies, who’s dad is in a comma. The sick is one of his peers, who has a case of the common cold. Sure, in this case of his resurrection miracle, it was a dog, but still very impressive.  Seeing a returned “Jesus” have to deal and navigate the trials and tribulations of living in the modern world, and try to live a more pious lifestyle, once he comes to the realization of his apparent divine nature was interesting. After all, this was a boy, who prior to his life changing experience, used to sneak around in trees with his friend, looking at playboy, or sneaking a peek at the girl next door, while she was changing. Once this is revealed, it is a little jarring, yet humorous at the same time having his parents and peers swear in front of him.

What I really enjoyed as a fanboy, was how writer Mark Millar, through the character of Jodie compared the Bible to the original Star Wars trilogy.  According to Jodie, Star Wars is the Old Testament, Empire Strikes Back, is the New Testament, because we find out that our hero is the son of a central figure from the first film. Return of the Jedi then, is Revelations because, just when we think our main hero is dead, he returns to save the day. When you read that description, you can’t help but think; “Why didn’t I think of that.”  The book really picks up at the half way point, when you realize they are telling the story via present day Jodie. We see flash-forwards of Jodie, recounting events to his modern day followers. There’s a big twist at books end, which will shock you. Jodie reveals that one day, a clandestine group came to retrieve him, taking him to his father. Jodie’s father isn’t God at all. In fact, his father is God’s exact opposite. This would make him essentially Bizarro Jesus (keeping the Smallville reference alive). Those clues will have to do, as I won’t outright spoil Jodi’s identity, or his prominent position in present day society. It leaves the story open for more, but also leaves you as a reader, wanting more. If you get impatient for Millar to write the next installment, you could always read Revelations, although I really want to see Millar’s particular spin on things.

I wasn’t familiar with Peter Gross’ art at all before reading American Jesus. His style has that sense of classic or vintage comic book style.  At times it can be very simplistic, while at times being very detailed. The truck accident was incredibly detailed, as were all the “Jesus” moments.  The locations in this book all looked great.  Whether it was Jodie’s boyhood home, the town church, the school, or the woods.  They all felt authentic, like places you could visit, existing in the real world.  The artist expresses emotions well in his art.  This is especially true in scenes featuring the priest who lost his faith, or Jodie’s concerned/protective mother.

A shout out must be given to colorist Jeanne McGee.  Her tones are very earthy and knows exactly when to amp up the bright colours. or when to tone things down, using plenty of greys when things get serious. Just look at the imagery of Jodie testing his powers in the park, and the scene of the dog resurrection, for a great example of the contrasting use of colours. I loved the fact that when we got flash-forwards, Jodie’s face was always covered in black shadow. This added so much weight, to the reveal of who Jodie really is.   The covers mimics the story and takes classic religious imagery, and adding a modern context to it! Definitely grabs your attention.

As a person of Catholic faith I think American Jesus Vol 1: Chosen reinvigorated the stories, that after hearing then 1000 times from at Sunday mass, or reading them yourself can get stale after a while.  If you’re  not religiously inclined, then this makes a fascinating sci-fi story.  This book may not be as well known as Mark Millar’s other work and it certainly doesn’t get as much acclaim as his other books, however, this easily ranks as one of the best non-superhero comic book stories I’ve ever read.