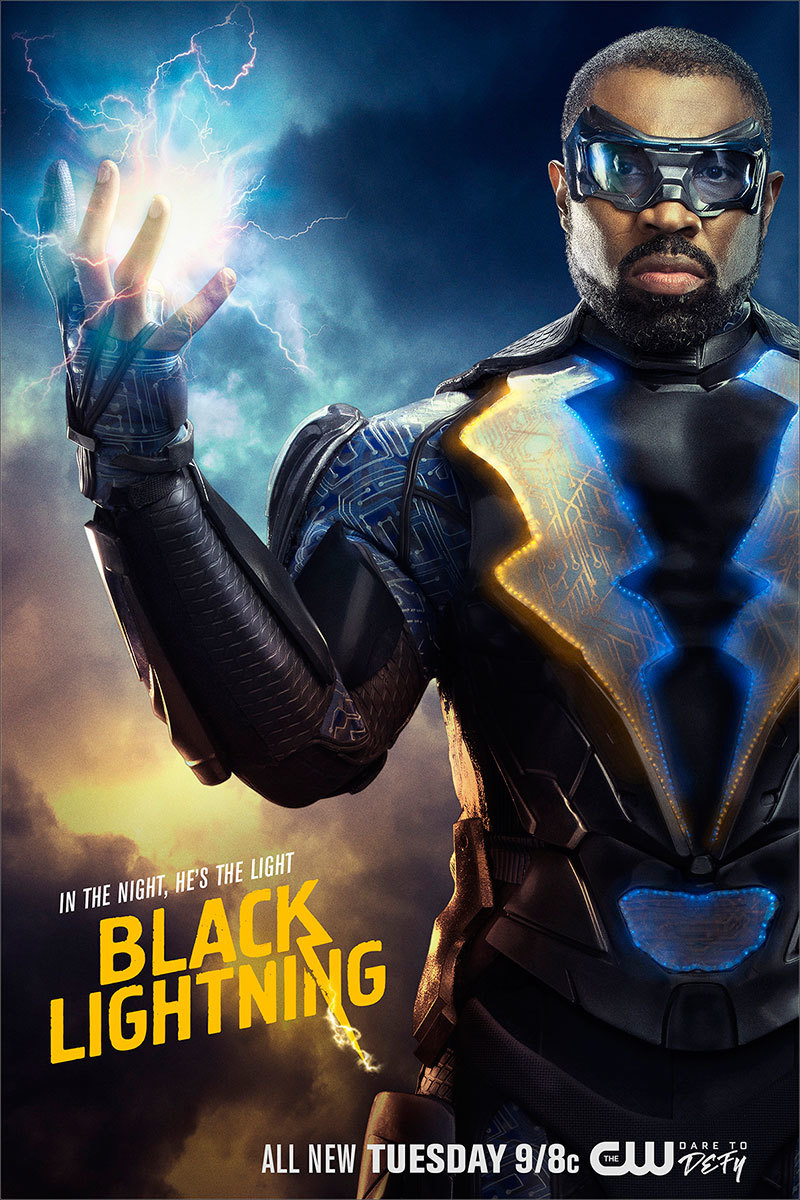 “While Jefferson Pierce (Cress Williams) continues to clean up the streets as Black Lightning, it looks like his daughter is starting her own journey as a superheroine and next week, she’ll face her toughest challenge yet when she begins investigating a new drug that’s hit the streets. ” (The CW)

With gang warfare, gun violence and racial profiling tackled on Black Lightning already, you had to know that drugs would be among the topics covered. DC Comics has a history of dealing with this subject. Both Green Arrow, and the John Stewart Green Lantern, featured comic book story lines that keyed in on drug abuse. In this episode, a drug incident featuring one of his students. He finds the student writhing in pain, before ripping a urinal out of the wall and trying to throw it at Jefferson. Pierce is able to safely subdue him. The implication from this scene to me, is that the drug enhances the users strength. That idea is never shown, or mentioned again, so I’m a little confused about this, to be honest. If they are going this route with the drug giving users “superpowers”. I hope the show treads lightly. We’ve seen this all to often in superhero television. Arrow and Gotham, specifically come to mind.

This drug outburst in Freeland, forces Black Lightning to hit the streets and do some investigations into this drug and who is pushing it out in Freeland. The way he goes about intimidating different sellers and dealers is great. It’s very reminiscent of Batman’s methods, to a degree. As you watch these scenes, you can tell Cress Williams is having an absolute blast playing this aspect of the character. This is the most of the four episodes, where we’ve seen Black Lightning doing the whole vigilante/superhero thing. Remember, up to this point, we’ve only got brief, all be it, awesome instances of Black Lightning kicking butt! I’ve compared Gambi to Alfred before, but I’d also point to Whistler, from the Blade trilogy. Especially with how hands on Gambi has been in this whole Black Lightning operation. We get another upgrade to the costume. That being electricity vision. Through his goggles/mask, Jefferson can see the electrical signature of anything that is powered on.

Now that I’ve gotten a better look at Black Lightning’s fighting style, it’s definitely that of a street bawler. There isn’t much martial arts technique there. It’s high impact and hard hitting, and fits perfectly, with this character and the costume he’s wearing. I loved that the character is starting to gain a reputation, amongst the underworld. One drug dealer Black Lightning confronts, is a long time friend of Jefferson. He basically tells Black Lightning , he knows his M.O. He’ll intimidate him, get the info he needs, then knock him out, before calling the police. There’s a hilarious scene, where the criminal tells Black Lightning what he wants to know, but before getting knocked out, asks our hero for a selfie. He doesn’t get it of course, but it was hilarious.

As Jefferson Pierce, our hero is fighting for the scholastic future of the student caught with the drug known as Green Light, The school board wants the kid suspended, he wants him to say. Gambi once again lies to Jefferson about some evidence he finds, and I’m getting more curious, as to his motives. I sincerely hope he isn’t up to anything nefarious. I like the character and his friendship with Black Lightning. As for Jefferson’s daughters, I’m sorry, I just can’t get behind the Jennifer character. I mean, it’s great that she is standing by and helping her boyfriend Khalil. It’s the right thing to do. Here’s the problem, Jennifer has been so poorly written and that relationship is so half baked, that I don’t buy into any of it. Having said that, Anissa continues to be a fantastic character. Much like her father, she too gets involved in breaking up the Green Light drug ring. Anissa breaks up a purchase and is subsequently threatened by the dealers. She later confronts them and uses her powers to teach them a lesson. We’ve established that she has some level of super strength, and she pushes those dealers rather hard, and throws them absurdly far. I like the attention to detail, that she checks their pulse afterwards, as Anissa still doesn’t know her own strength. To be fair, neither do we.

I actually am enjoying the progression of the relationship between Anissa and the comic book reading bartender she met last week. Their relationship will no doubt continue to grow, after Anissa saved Grace from some homophobic bar patrons. For my money, this relationship feels far more natural and believable, than Jennifer and Khalil.

We get a little more of Tobias Whale and Lady Eve. She reveals to him that the higher ups within The 100 Gang are losing faith in him, since it’s apparent that he didn’t kill Black Lightning, which was the only reason he advanced so highly in the organization. She warns Tobias, that if he doesn’t kill the hero, he will be out of the organization. Where I thought last episode did a good job at keeping Tobias Whale as a powerful figure, despite being Lady Eve’s underling, this episode, during their conversation, he really felt inferior to her. They tried to build him back up, by having a scene, where he beats the crap out of the coroner who identified Black Lightning as dead. However, they made things worse by having him call his sister for help. The way the writers on this show built up Tobias Whale in the first couple episodes, you’d think he wouldn’t need any help orchestrating the demise of an enemy. The episode gives us no background on Tobias Whale’s sister, or why she’d be uniquely qualified to help kill Black Lightning. Though, I did like the plan she did come up with; turn the people’s hero, into the villain by exposing the collateral damage he causes, and focus the blame of Khalil’s shooting and paralyses on Black Lightning.

While Black Lightning episode 4 gave us more vigilante super heroics, I think it either rushed or glossed over the consequences and severity of the Green Light drug outbreak in Freeland. This is the first time watching this series where I thought the episode felt short. In my opinion, no show has had a perfect run of episodes and not even Black Lightning is immune from this fate. While episode 4 is a step backward, it’s still enjoyable to watch, and hasn’t changed my opinion, or excitement for the series overall.

Previous post Chris Hemsworth, Who’d Be The Perfect 007, Addresses Idea of Playing Him

Next post CLOVERFIELD 5 Could Be Happening with Daisy Ridley Starring