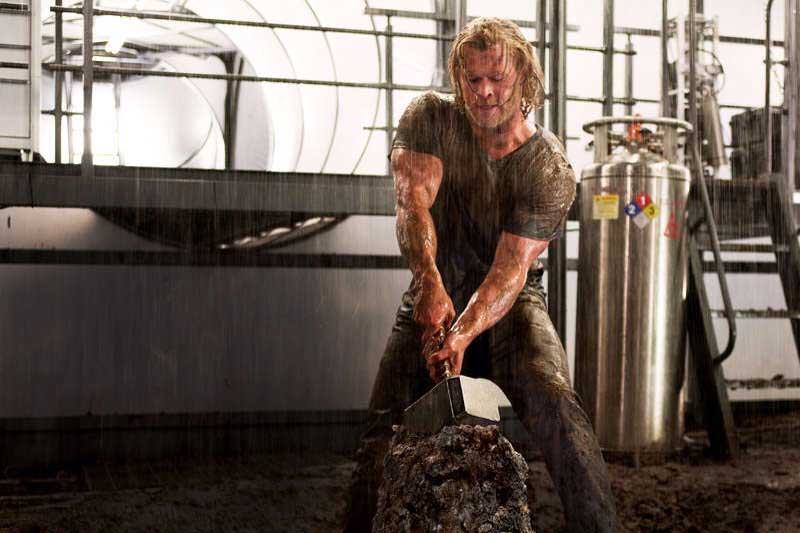 I mean, we knew the movie was coming out. Obviously. They advertised it. We showed up.  But nobody knew quite what to expect.

One of the fun things about following comic book movies for a long time is looking back and seeing when the speculation was just wrong. Lately, the rumor mill has tended toward turning things sour, but things used to be different. We used to savor every casting detail and scrutinize every set photo for the remotest possibility of where it would lead.

So when Marvel brought on Kenneth Branagh to direct to Thor, we were all very surprised. At that point, Branagh had a decade of filmmaking under his belt, but it was mostly adaptations of Shakespeare. He was a serious director, or rather, a director of “serious” movies. Rumors arose that Sir Anthony Hopkins would play Odin and that Thor was filming in a location made to look like an old Norwegian village.

Fanboys put it all together and figured it out: Thor would be a Shakespearean-style period piece set in Norway and somewhere before the end of the film, we would see Thor coming to modern times in order to accommodate The Avengers. To quote Erik Selvig in Age of Ultron, “a near miss.”

What we actually got from Thor is the world-building that Iron Man 2 takes the blame for. While Iron Man and Incredible Hulk have some basic science in the premise, incorporating magic and ancient aliens is a different kind of issue. Audiences are willing to suspend their disbelief just enough to think that unchecked rage and a radioactive/genetic cocktail could turn Bruce Banner into the Hulk. People have no trouble with the idea that genius billionaires with more money than restraint could create a flying suit of armor. In fact, I’m not convinced that’s outside of what Elon Musk is working on right now.

But would audiences accept that the world with Iron Man and the Hulk includes immortal space-gods that spend their time feasting, battling, and monologuing in Elizabethan English about who has the best cape? …maybe!

Thor is the subtle mechanism that Kevin Feige used to shift the context of the Marvel Cinematic Universe just a little bit to the left. If Iron Man 2’s job was to let us know that Tony Stark’s world is bigger than Tony Stark, then it was Thor’s job to tell us that outside of that world is an even larger world. A world with bilgesnipes.

Making the world larger is good, but the real trick is getting people to accept that magic is maybe possible. Thor gives us the audience the excuses we need to turn our brains down just enough to accept that things that are mistaken for magic could exist.

Maybe you remember the scene, especially because it was in the trailers. Sitting next to a campfire, Thor tells Jane “your ancestors called it magic, but you call it science. I come from a land where they are one in the same.”

Sure, buddy. That’s why the only people who can lift your semi-sentient magic space hammer are the ones that meet Odin’s definition of worthy. That’s why you can throw the hammer so hard that it allows you to fly (and somehow steer). That’s why Odin can turn Thor from a mighty Asgardian to a puny human and back just by speaking. Because science!

All jokes aside, Thor is actually a pretty good movie. It also gives the MCU one of it’s more interesting characters in Tom Hiddleston’s Loki.

For the record, I don’t think Marvel has a villain problem and Loki is the strongest argument to that point. Loki is a fully formed character from the beginning. He’s even interesting apart from the main character. But in this context, Loki and Thor form an amazing duality.

Even though he’s smarter and more clever, Loki is jealous of Thor’s claim to the throne. I’m convinced Loki doesn’t even really want the throne. We clearly see in the The Avengers and in Thor: Ragnarok that Loki is a person who simply desires what other people have. He wanted to conquer Earth, but never thought past the invasion. When he’s sitting pretty on the throne of Asgard, he watches plays about himself and eats grapes as the Nine Realms crumble to the ground in slow motion.

In Thor, Loki gives us a glimpse of the political tensions both inside and outside of Asgard. We understand that while the Nine Realms are currently at peace, it might not stay that way for very long. Thor stumbles into those areas, but Loki lives in them.

Speaking of which, all of this world-building and what do we get from Thor himself? Not much. We barely got to know the person he was before he was humbled. (To be fair, there might not have been that much to understand). With Tony Stark, the consequences of his self-destructive behavior come back to bite him in the butt every half hour so. Like Loki, we’re constantly reminded of the person Tony used to be. Not so much with Thor.

In the public eye, Natalie Portman’s Jane Foster is tagged as a character that’s just there to look pretty and pine over the male lead. That might even be true. I’m not even going to argue against that except to say that the reverse is kinda true about Chris Hemsworth as Thor. Handsome man want to kiss pretty lady. Jane and Thor are the most overtly romantic through-line of the MCU and all I could tell you about their relationship is that they like each other a lot. It really seems like the only thing driving Jane and Thor together is the fact that they’re the two most attractive people in the movie.

From Thor’s perspective, the story happens and he just rolls with it. His Earth-based adventure plays like an episode of Star Trek. Very standard fish-out-of-water stuff. We know how it will all turn out before the movie starts. It’s everything else that happens on Asgard and with SHIELD that sets the stage for Loki’s big day in The Avengers.

This film seamlessly incorporates callbacks to the other films with SHIELD, helping the audience to understand Nick Fury’s “jack-booted thugs” a little better. We get a shadowy cameo from a future Avenger in Hawkeye. Most importantly we spend just a little more time with Agent Phil Coulson, which we all know is critical for the 2nd act climax of The Avengers.

While Iron Man 2 is the one people think of when they talk about MCU world-building, Thor is the one that does all the heavy lifting. You just don’t notice it as much, and a lot of the credit for that belongs to the screenwriter Zack Stentz. Without Thor, Loki is just the general of a faceless CGI army. Without Thor, SHIELD is just the FBI. Without Thor, Agent Coulson is some guy that Pepper knows. Without Thor, The Avengers stinks.

Think I’m wrong? Feel free to comment below or hit me up on Twitter. I’m @NiceRevenger and I could do this all day.

Come back next week when we talk about my favorite Avenger, Captain America.