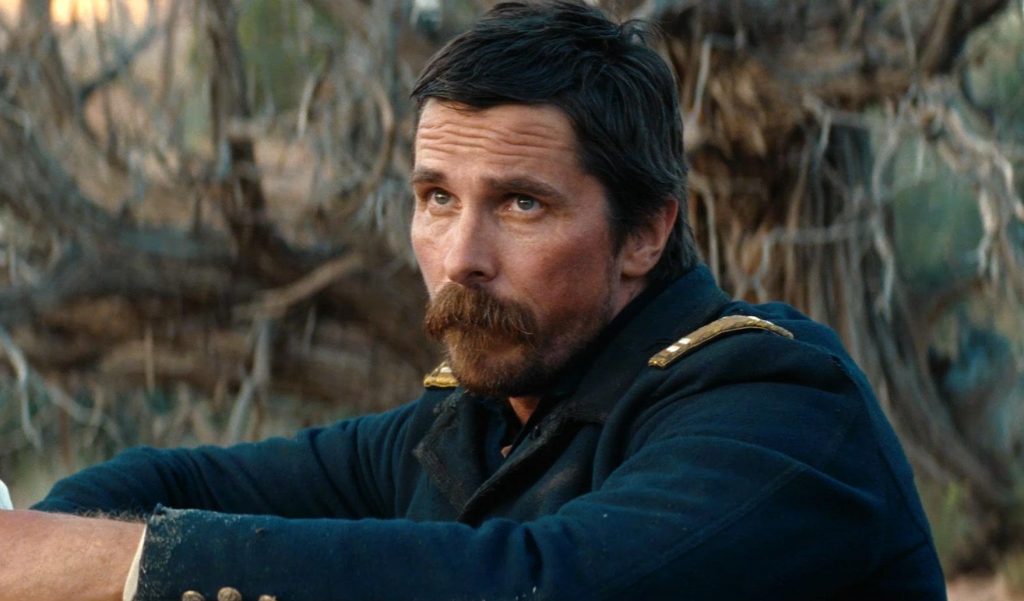 The Western is a staple of American cinema. In the John Wayne era, the bad guys wore black hats, the good guys wore white, and everything from the film stock to the character dynamics were equally as mono-chromatic. As time went on with auteurs such as Leone and Eastwood, shades of grey began creeping in, yet the ideals of masculinity were firmly in place, even if said masculinity was at times toxic. It’s with this history in mind that I found myself surprised, pleasantly so, that this particular Western serves as a decomposition of closed-mindedness and toxic masculine ideals.

The film takes us to 1892 New Mexico. Capt. Joe Blocker (Christian Bale) is on the verge of retirement. He’s a man whose made a career of rounding up Native Americans, and is given the last assignment he would want for his final orders. He must escort captured Cheyenne chief, Yellow Hawk (Wes Studi) back to his tribal lands in Montana, along with his family. Blocker and Hawk have a heavy history together, having killed each other’s men in past confrontation. Along the way, the come across the charred home of the Quaid family, and it’s sole surviving member Rosalie keeping vigil on her dead family.

I feel the positives outweigh the negatives in Hostiles for sure. But the negatives are particularly frustrating because they are clunky enough that they prevent the film from achieving the greatness it deserves. The script was probably a draft short of being just right, with certain character moments killing the momentum of others, and the depiction of Native Americans flirting with dangerous stereotypes at times.

Hostiles looks beautiful, making great use of its Old West locations. The casting of the two main roles is inspired. Rosamund Pike is a standout as Rosalie Quaid, a woman whose entire family is murdered by a Comanche gang, and yet she’s capable of great compassion for her Cheyenne traveling companions. Christian Bale is sensational in this role, with a performance depicting a man brought kicking and screaming towards enlightenment. His nuanced and seething, understated performance glues together the more clunky moments in his character’s arc, and delivers a transformation that is believable and engaging.

The arc of his Capt. Blocker in Hostiles is particularly timely given the current political climate. In a time where men of power are having a reckoning of past transgressions coming to haunt them, it’s fascinating to watch this man come to terms with his tone-deaf ideas. It’s not a pretty arc either, and the character has many an opportunity to lose his way. Without giving away too much, it’s fascinating watching this character confronting the mirror that is put to his face time and again.

Narrative road bumps aside, Hostiles is one of the more earnest films I have seen in a long time. It’s actually kind of refreshing watching a film avoid sensationalism in the face of very extreme events and realities. It truly does have something very important to say about duty, the folly of revenge and the importance owning your flaws. It doesn’t always say it as eloquently, or even frankly as responsibly, as it should. But it’s worth a listen.

One thought on “RTF Review: “HOSTILES””