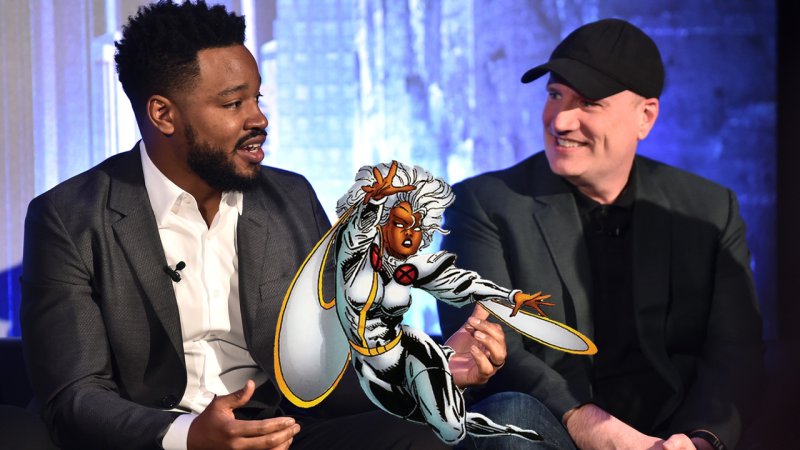 Over the years, the perception of Kevin Feige has been very fluid. Some see him as the benevolent architect behind all of their Marvel dreams coming true; Others see him as a draconian dictator who muscles out anyone who doesn’t adhere to his vision (like Edgar Wright); Some see him as just an overrated suit; And others say he’s a great collaborator who really does believe in the filmmakers he hires and trusts them to make the movies they want. Black Panther director Ryan Coogler has recently made a few statements about him that firmly indicate that any negative reports about the man are far off the mark.

Coogler’s got nothing but kind, effusive things to say about the man, and yet it doesn’t feel like PR lip service. And, judging by the early buzz on Black Panther, the proof will be in the pudding when we see an emotional, layered superhero epic that was truly crafted by a filmmaker of Coogler’s caliber and not by some Marvel committee.

There are two quotes I’d like to point you towards today. One is from a couple of days ago, where Coogler pulled back the curtain on what “Marvel Studios” really is, since people have this over-stuffed impression of it being this massive enterprise filmmakers must overcome in order to get their vision approved.

“You think of Marvel like this big studio, like the biggest studio in the world right now, but it’s really just Kevin and his two friends. (laughs) It’s these two really smart people, Louis D’Esposito and Victoria Alonso, and on this film, there was [executive producer] Nate [Moore]. And they’re all very different people, and Kevin is kind of at the head of this. I told him, ‘I want to make a film that works on every level that you guys normally work on, and I want to make it with these themes. I kind of had these themes in mind.’ And he was like, ‘Great. Let’s go.’ I didn’t expect that. But as I got to know these guys, specifically Kevin, it’s what he’s all about. He’s all about making something that works as a piece of entertainment, but leaves you with something to think about. He was very encouraging.

And what about notes? Creative types often complain that working with big companies often leads to having to compromise your vision by adhering to all kinds of demands and notes from the powers-that-be. Coogler referenced what kinds of notes he’d get from Feige:

I was getting notes when we were working on this like, ‘Make it more specific. Make it more personal.’”

That doesn’t sound too shabby at all.

And while he’s been hard at work promoting Black Panther, a question he gets asked at junkets lately centers on the impending arrival of the X-Men into the MCU. People love to bring up fan-favorite ideas like introducing Storm in the next BP movie. Coogler addressed the question of the X-Men entering the fold, but mainly threw it into Feige’s capable hands, where he thinks our beloved mutants will be well taken care of:

“To be honest with you, I don’t know enough about that acquisition to even talk about it, man. I’m like caught up there while we were trying to finish the movie. So, I think, look — if it’s something that goes through, I can’t think of better hands for those characters to be in than Kevin’s. I’ll say that.”

That’s quite a vote of confidence from the director of Creed and Fruitvale Station. He seems to think the world of Feige, and that’s good news. Because if Black Panther is as good as everyone is saying, I think we’re going to want Coogler in the Marvel mix making BP sequels for many years to come!

Previous post BLACK PANTHER Could Blow Past These Crazy Box Office Projections, And Here’s Why