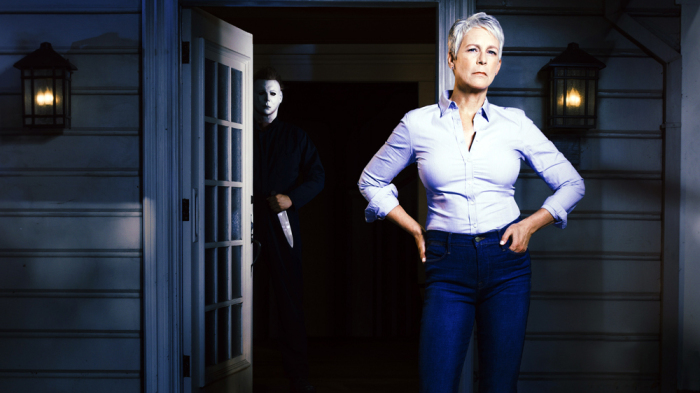 It’s official! Production has kicked off for David Gordon Green’s new Halloween movie, and there’s a ton to be excited about. For starters, the film will be a direct follow up to John Carpenter’s classic film from 1978. It’ll shake the ol’ Etch-A-Sketch clear of everything that came after it, including the Rob Zombie reboot. Jamie Lee Curtis will be back as Laurie Strode, and even John Carpenter will be back in some capacity. He apparently was asked to offer notes on the new script, and the horror maestro will actually be scoring this film- just like he did on the original.

Green’s reverence for the original Halloween doesn’t end there, as it looks like he asked Carpenter for access to one very special production tool to use on Curtis’s first day on set:

Yup, there’s Curtis as Strode, working on her first shot in Halloween, with Gordon using the same slate Carpenter used 40 years ago!

This comes a day after blurry images of Michael Myers himself appeared on the web:

Holeeeeeee crap! The first on set photo of Michael Myers in the new Halloween film! Can you spot him? . . Special thanks to Royce Melborn (@Mayjin_Jerome) and @creepycarlg for re-posting. . . IT’S HAPPENING! 🎃🎃🎃😊😊😊

There he is! The Shape, himself, standing by that tree on the right. And what makes this even cooler? There’s a good to fair chance that the man behind the mask is Nick Castle- the very same Nick Castle who played him in the original Halloween.

They’re killing me with all of this fan service. I’ve been a Michael Myers/Halloween fan since I was probably way too young to even know about it. The fact that Green and co-writer Danny McBride are taking this series back its roots gets me super pumped. While the duo is primarily known for comedies like Pineapple Express, I’m actually quite excited about their credentials because real horror, just like comedy, is all about timing. You build, build, build, get the audience into the palm of your hand…and then you spring your trap.

That sort of suspense was what made the first Halloween such a classic. It didn’t feature excessive gore, or rely on jump scares. It crept up on you, just like Myers creeps up on his prey.

The film is set to arrive October 19.

Previous post JUMANJI: It Turns Out That Spidey Is No Match for the People’s Champ!