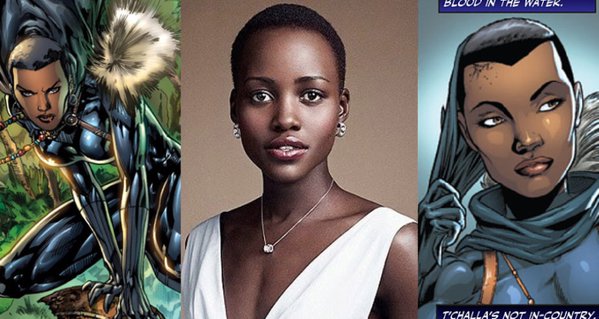 There has been nothing but Black Panther love on Revenge of The Fans as of late. We have speculated about the positive outlook on the box office. Dropped news on where the film will land on the MCU timeline. We also dropped a clip and new featurette for everyone! Some love has to be shown to some of the costars in the Wakanda focused action flick as well. Star Wars: The Force Awakens star Lupita Nyong’o makes her debut in another prominent cinematic universe in Black Panther as the character Nakia, a Wakandan spy, and more interesting, former flame of newfound King T’challa (Chadwick Boseman.)

Before we go into Academy Award Winner, Lupita Nyong’o’s take on the character, let me break down Nakia real quick. In the Marvel Comic Black Panther-verse (yup, just made that up. You hear it again, I get credit. Thanks!), Nakia is part of the Dora Milaje or “Adored Ones.” So, she was a bad ass bodyguard, basically. These wives-in-training only speak Hausa, and only to their king, the Black Panther. Their presence is to maintain a balance of power and to prevent civil war. Enter Mephisto with his crazy illusions, Nakia became obsessed, wanted to kill T’Challa’s ex-girlfriend and eventually became the villain, Malice. There’s more, but I’ll save that for a another time. Comic lessen over!

When asked about this complicated history within the Black Panther-verse (number two!) Nyong’o told journalists who were doing a set visit that Nakia’s loyalties lie with her native kingdom.

“I can say that Nakia, when we meet her, is a war dog which means she’s one of Wakanda’s CIA agents,” Nyong’o explained. “Her job is to spy around the world and report back to Wakanda to keep Wakanda safe and keep Wakanda informed.”

An official character bio describes the Nakia character as a “Wakandan spy pulled from her mission abroad by her former flame T’Challa.” Could this leave room for a possible Malice cameo at some point? Who knows? I know that I am a fan of Nyong’o and would love to see her character grow with the Black Panther-verse (number three! Now you have to use it as well.)

Nakia “consistently gets involved in conflict for the good of others, adamant to use her abilities to help those in need,” and she “puts her skills of subterfuge and hand-to-hand combat to use in order to fight alongside Black Panther ” following King T’Chaka’s death in Avengers: Civil War. This also gave rise to some new Wakandan enemies, namely Erik Killmonger (Michael B. Jordan), one of T’Challa’s rivals threatening his ascendancy to the throne.

Nyong’o praised Black Panther for not taking the easy way out and pitting its female characters against each other, stating that director Ryan Coogler “made a point of avoiding the expected female-rival narrative.”

“In this genre, where spandex is involved, oftentimes the women are pitted against each other,” Nyong’o said.

“In our story, there are so many different women holding their own space. Women may be in competition with each other, sure, but that doesn’t necessarily mean there’s an absence of love or respect.“