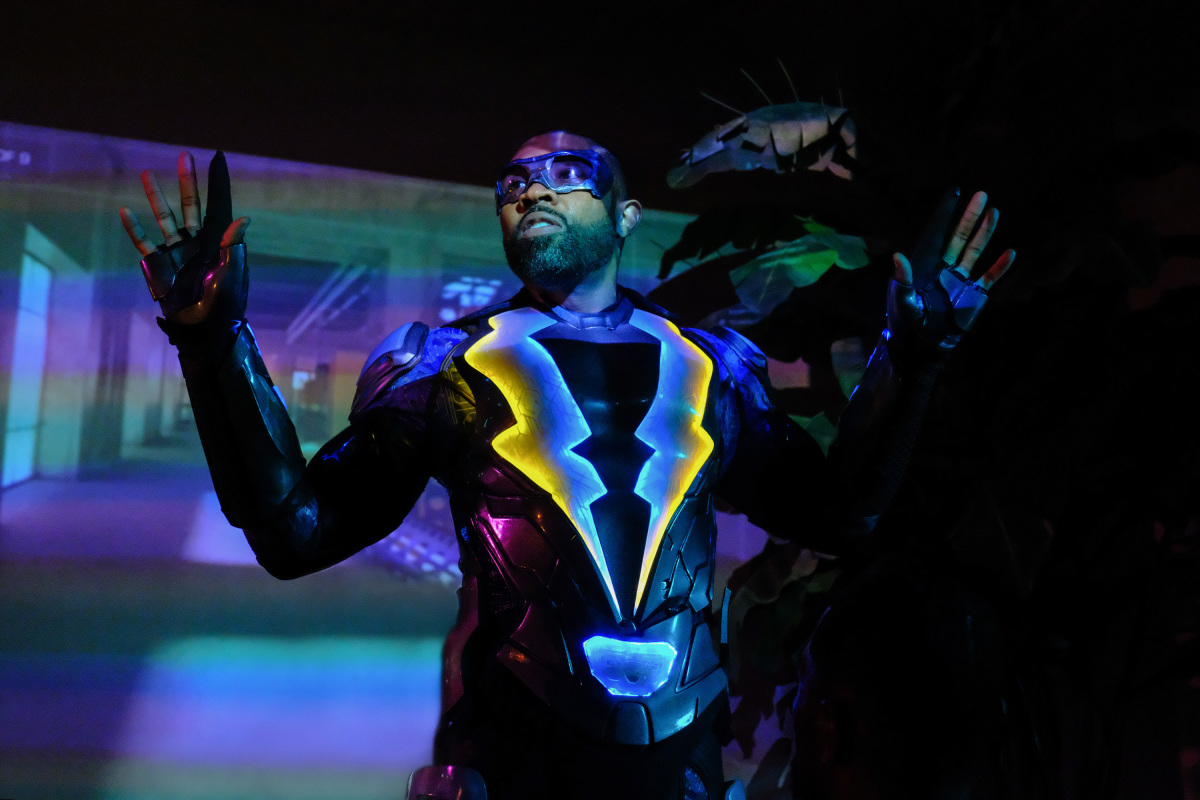 “IS HE BACK? – As the community struggles with the violence surrounding them, a glimmer of hope appears: Is Black Lightning (Cress Williams) back? Lynn Stewart (Christine Adams), noticing the changes in the community, is also left wondering. While Jefferson Pierce (Cress Williams) struggles with his decision, Gambi (James Remar) urges him to take up the mantle once more and return to life as Black Lightning. Anissa (Nafessa Williams) and Jennifer (China Anne McClain) try to deal with the aftermath of their jolting experience” (The CW)

The episode description using the phrase “glimmer of hope”, is spot on. This episode picks up almost immediately after the end of the premiere. While evening reports do seem more up beat and positive about the situation in Freeland following Black Lightning’s reappearance, not everything is on the up and up. From Jefferson Pierce’s point of view, getting back out there and using his powers, has left him in incredible pain, to the point where he has to take a couple of pain killers. Once again, reinforcing that being a superhero isn’t all fun and games.

When Lynn finds him on the floor of the bathroom, again echoing the pilot, she cradles him and blames herself for getting him back into this world. He reassures her it was a one time deal, for the sake of their daughters. The two then reminisce about the first time they discovered his powers. The maturity and supportiveness of this relationship is on display once more. Throughout most of this episode, you get a sense that they can rekindle things, although, that seems far less likely by episodes end. One area where this episode let me down, was the fact that they told us a piece of this story of how they discovered his powers. I was expecting to actually see these moments via flashbacks. We still might mind you, as this was only a piece of that story. However, the fact that there were zero flashbacks was a downer, especially after they were used so well the first time around.

As for how Jennifer and Anissa are handling the aftermath of their ordeal, there’s good and bad, Jennifer is sneaking around with her best friend, engaging in underage champagne drinking, behind the gym belchers. I get that she may have some PTSD from that kidnapping/motel incident, but I feel her response was more of a clichéd TV teenager response, we’ve seen over and over again, on The CW. I hope this doesn’t become a prolonged trend for the character.

Anissa spent the multiple nights following the ordeal at her girlfriends house. Here we get a reveal that she is a lesbian. Kudos to The CW, for once again blazing the trail, portraying modern relationships, without watering it down, or being afraid of bigots or closed minded audience members. Unlike some shows, this relationship felt natural and realistic, as opposed to being haphazardly thrown in or forced. Nafessa Williams is good in these scenes with her on screen partner. The issue I had in these scenes, occurred when Anissa attempted to tell her girlfriend about her apparent enhanced strength, specifically last episodes sink breaking incident. The girlfriend realistically played it off as an old sink, coupled with Anissa’s stress and nerves. However, Anissa didn’t seem forceful or freaked out enough about the incident when recounting it. Both parties just kind of left it hanging.

In this instance, I’ll call out the writers, over the actress. The end of the episode features another example of Anissa’s powers, as she unintentionally stops a robber, who held her at gunpoint, by accidentally throwing him across an aisle, knocking him unconscious. I do like this “slow burn” reveal of her abilities, but her calm and cool reaction was awkward, especially given her shocked reaction, after the sink broke. Given the variety of reaction to her abilities over these first two episodes, I have to wonder, if she knows Black Lightning is her father!?

Jefferson Pierce, reneges on his “on time” only stance on Black Lightning, for two main reasons. At a parental assembly at the school, the parents are still living in fear over The 100 Gang, and the fact that the daughters of many of these parents, are being used for illegal sex work. Even though these parents don’t know that Jefferson is Black Lightning, they question him as to why Black Lightning only rescued his daughters. Unable to answer them, Jefferson begins to blame himself, and internalize their problems. He is further prodded into action, when one of his former students, now a parent, named Lawanda, tries to expose Lala in the act of sex trafficking. She confronts him, while secretly recording the encounter on her phone. She is shot for her troubles, but Lala and his goons had no idea they were being recorded. When Police Inspector Henderson, informs Jefferson that Lawanda was killed, Gambi hacks the police’s servers and gains access to Lawanda’s phone logs, providing Black Lightning with Lala’s location. There are a few interesting takeaway’s from this.

First, Inspector Henderson is really good friends with Jefferson Pierce, while at the same time, he actively pursues, Black Lightning for his vigilante activity. This is very reminiscent of the Bruce Wayne/Jim Gordon relationship, as it compares with the Batman/Commissioner Gordon relationship of the early Batman comics. In last weeks review I noted that Gambi was Alfred, to Jefferson’s Batman. Well after this weeks episode, I can define Gambi as a cross between Michael Caine and Jeremy Irons’ Alfred.

We get a great scene between Gambi and Lynn. When Lynn realizes that Jefferson has decided to become Black Lightning on a permanent basis, she urges Gambi to discourage him from doing so, Gambi refuses, saying the choice is up to Jefferson. It is in this moment, where we realize that Lynn blames Gambi for Jefferson’s “addiction” to using his powers. Gambi meanwhile, blames Jefferson’s “addiction” to Lynn for forcing him to stop being Black Lightning, thereby leading to the city being crime ridden, and in disarray. Both Christine Adams and James Remar convey a cordiality, but an animosity filled relationship between their two characters. Once again we don’t see Cress Williams suit up as Black Lightning until the third act of the episode. Once again, it’s justified , as Jefferson is desperately trying to keep his promise to Lynn. However, the injustices going on around him are too great to ignore any longer. You can see the internal struggle making this decision had on Jefferson Pierce, through Cress Williams’ facial expressions, movements, etc. When Black Lightning does face off against Lala, there’s a great battle in the stairwell. Sure, Netflix’s Daredevil did it better, but this one was well choreographed and quite exciting. Black Lightning’s punches looked even more forceful and harder in this episode. Plus, you can actually see his suit funneling electricity through to his punch, this time around.

Marvin Jones III gets a little more screen time in this episode. In this episode, I really got a sense of how big and menacing this man is. In my last review, I mentioned how he reminded me of Netflix’s Daredevil version of Kingpin. I have to add to that a bit. In this episode of Black Lightning, I saw flashes of the late, great, Michael Clarke Duncan, in Tobias Whale. Whale has that suave, cool demeanor, which Clarke Duncan displayed in the 2003 version of Daredevil. There’s a scene at the end of the episode, where he mercilessly chokes Lala to death, also calling to mind a scene from that film. The fact that Tobias Whale walks into the Freeland PD, and chokes out Lala, with police casually standing by, shows how corrupt law enforcement is, signaling a long, uphill battle in store for Black Lightning, if he hopes to save his city.

Episode 2 of Black Lightning did some small things that had me puzzled, and in some cases a little disappointed. However, make no mistake, it was another excellent installment from The CW’s newest superhero series. My anticipation for episode 3, is just as thunderous, as my anticipation for episode 2 was, after the pilot. You know that saying, lightning never strikes twice? Well, in the case of Black Lightning episode 2, that statement couldn’t be more wrong.

Previous post What Lucasfilm Learned from the MCU (That Marvel Forgot)