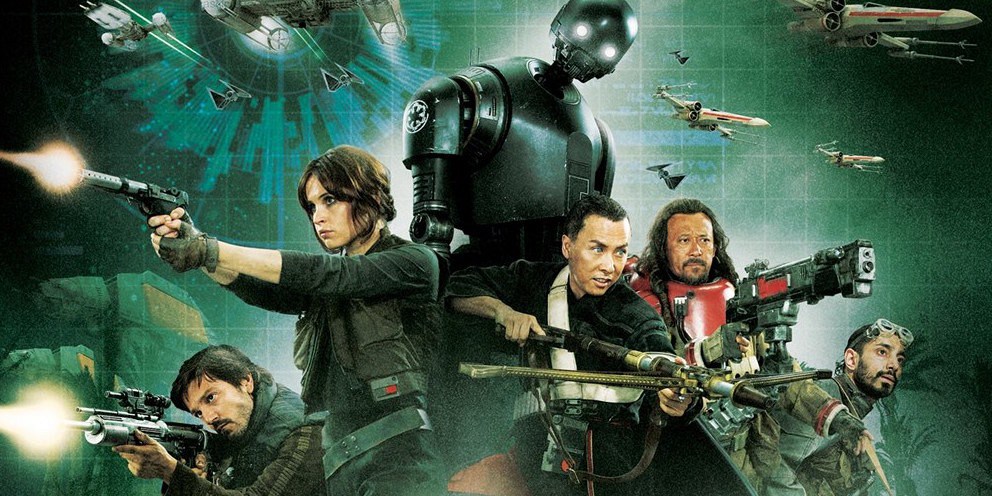 I love watching the ever-present struggle between the narrative and business side of movie-making. Mentioning the website that originally posted this article is against my policy at the moment, so I’d like to share this Lucasfilm / Marvel piece I wrote a year ago here. I present this here for posterity. Feel free to tell me if I’m crazy. – Jon

When it comes to franchise-building, everybody wants what Marvel has.  Even before Phase One was complete, Universal, Fox, Sony and Warner Bros all started working on their own take on the Cinematic Universe model.

Successes have been hit or miss. Sony threw in the towel on their Amazing Spider-Man series to join forces with Marvel.  Warner Bros is three films into the DCEU, but has yet to have an undeniable success.  While Fox continues to deny that there won’t be a sequel to the Fantastic Four reboot, Fox has slowly gained better and better footing with the X-Men franchise.  2016 marks the first time in series history Fox has released an X-Men/Mutant film without Hugh Jackman directly onscreen.

Back in 2013, Universal was so desperate to start their Universal Monsters Cinematic Universe that they hijacked the production of the nearly finished Dracula Untold to shoehorn in an ending that brought Luke Evan’s Dracula from the Dark Ages to present day.  Dracula Untold has largely been forgotten and the upcoming The Mummy reboot starring Tom Cruise is being positioned as the new beginning of the franchise.

So why would Star Wars be any different?  After all, when Disney bought Lucasfilm in 2012, they bought the entire Star Wars Universe and abundance of material to make films with.  There were so many Star Wars characters and stories that the Disney company lopped off entire sections of the canon in order to make way for more original stories.

So now that Lucasfilm has released Rogue One: A Star Wars Story, we have our first glimpse of what these new, standalone original stories will look like.  Reviews are favorable.  The box office is good.  I’m sure you will correct me in the comment section when I say it lives up to the hype.  Fanboys can look forward to these films filling in the time while we wait to find out what happens to the Skywalkers in the Episodic main series.

The remarkable thing about Lucasfilm’s Rogue One is that, despite its reliance on the events of previously released films, it stands on its own in a way that Marvel movies do not.  For obvious reasons, there will be no continuing storyline for these characters.  There is no end credits stinger to get us excited for the next film.  There will be no gathering of Ewoks singing Yub Nub while the ghosts of Cassian Andor, Jyn Erso, and K-2SO nod approvingly toward the onlooking victorious heroes.

By design the next Star Wars Story film will be about something else entirely, and that is refreshing.  We know that in 2018 there will be a young Han Solo film, but we don’t know the plot.  After that, who knows?  Maybe an Obi-Wan Kenobi film starring Ewan MacGregor.  Maybe a prequel (or even sequel) about Boba Fett.  It could be anything from Dash Rendar, to Ulic Qel-Droma, to Wedge Antilles.

But what about Lucasfilm’s sister company that it learned so much from?  If you look at Marvel today, they’ve taken the story of Tony Stark introduced in Iron Man, expanded it’s scope, characters, and narrative in order to make it a somewhat larger story of Tony Stark. In that way, you can almost say that the MCU is practically the Tony Stark Cinematic Universe.

The MCU is going full speed towards the sequel to Avengers: Infinity War with three films a year through 2019. As exciting as the prospect of Infinity War may be, knowing exactly where the MCU is headed sort of takes the fun out of it, doesn’t it?  When Doctor Strange ended, nobody was surprised to find out where that infinity stone was hiding.  While James Gunn has said that Guardians of the Galaxy Vol. 2 will not feature any infinity stones or Thanos, we know that the Guardians are headed to Infinity War as well.  Even though Tom Holland has yet to be announced a for Infinity War, we’ll all be very surprised if Sony and Marvel don’t work out at least an appearance from Spider-Man. [Chris Pratt, Tom Holland, and your mom are now confirmed for Infinity War].

Just about the only thing we don’t know is whether or not Vision will die when Thanos likely rips the infinity stone out of his head.

While I’ll admit I’m a huge Marvel fanboy, I find myself longing for the days when comic book franchises didn’t let us all know exactly where they were going 7 years ahead of time.

So is Marvel starting to lose its footing by telegraphing its future and removing any sense of suspense? Do you agree with me that Lucasfilm managed to surprise us with Rogue One in a way that Marvel Studios has forgotten how to do?