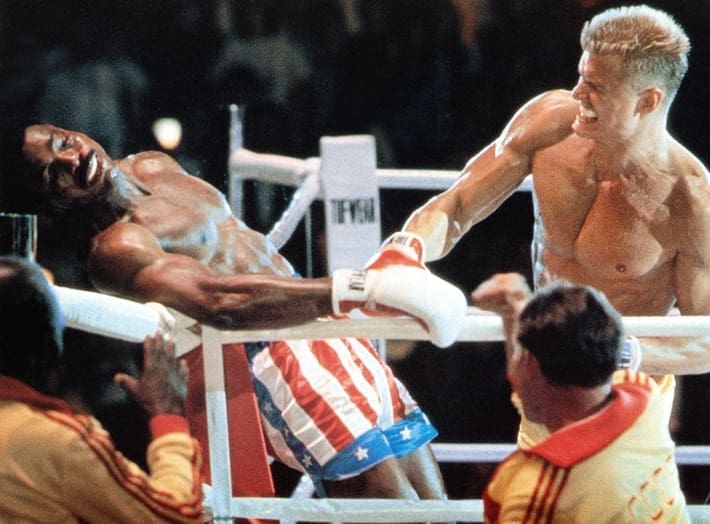 Creed II is on the way, and the train is starting to pick up steam as it leaves the station. Last month, the big news was that Sylvester Stallone was stepping down as the film’s director to make way for Steven Caple Jr. to take over. It was probably the right move, considering what made the first Creed such a success was what a fresh spin on the Rocky mythos it was, thanks in large part to the work of Ryan Coogler. With Coogler no longer calling the shots (thanks to commitments like Marvel’s Black Panther), it seemed like a bit of a step backward to bring back the old creative guard to continue the new work of reinventing Rocky.

What remains in place is the script, written by Stallone and Cheo Hodari Coker (Luke Cage), and it would appear the film is set to revisit the events of Rocky IV in a monumental way.

It’s been known for months that Stallone wanted to bring back Dolph Lundgren’s iconic Russian boxer Ivan Drago. Lundgren has even posted videos on his Instagram to hype up his return to the role he last played in 1985.

At the time, it seemed like they were heading down a path where Michael B. Jordan’s Adonis Creed would be fighting either Drago’s son or, perhaps, protegé. Now we know exactly what the deal will be, thanks to a post from Stallone, himself:

In the post, Stallone reveals that Florian “Big Nasty” Munteanu has been cast as Drago’s son in Creed II.

While I’ve seen some folks out there deride the idea, I think this far more meaningful than folks are giving it credit for. On the surface, it seems like a very nostalgic step backwards. There’s something sort of corny about the idea that Drago just happens to have a son, who happens to be a boxer at the same time that Rocky Balboa has become Creed’s trainer and helped him break into professional boxing. It’s all very Hollywood, and it can almost seem like an attempt to squeeze some extra cash out of people’s nostalgia for the very-quotable Rocky IV instead of continuing to forge a new path.

But here’s why I think the cynics are missing something: A big part of the emotional core of the first Creed was Adonis grappling with the legacy of his father, Apollo. A huge aspect of what drives our new protagonist is his attempt to find peace with the ghost of his father. In Rocky IV, it’s Apollo’s hubris and penchant for making a spectacle of himself that finds him standing in the ring across from Drago in a match he was ill-prepared for.

Apollo refuses to quit, even as his crew begs him to let them throw in the towel to end the match. His pride won’t let him back down, even as he’s clearly in over his head…and the injuries he suffers at the hands of Drago lead to his untimely death; A death that would leave Adonis forever fatherless.

The ramifications of that are hugely profound. Adonis grappling with how his father’s ego cost him his life, and how it robbed him of the chance to ever meet his dad, will be very fertile ground for an actor of Jordan’s caliber. It’ll be fascinating to watch. And for Rocky? Whoa. His best friend is dead because he didn’t throw in the towel to save him, and now that friend’s son wants to put himself in that same position? There can be no drama without conflict, and this sounds like a premise filled with tons of both.

And, despite it feeling very Hollywood, you’d have to think this situation would very easily happen in real life. In the world of boxing, where promoters are always looking for that big fight that captures the pop culture zeitgeist, you’d better believe that a fight like this would happen in a heartbeat. The son of a boxer who died in the ring fighting the son of the boxer who killer him? That fight would make a promoter millions! So it’s really not that far-fetched at all.

Creed II will be released on November 21. Aside from Jordan and Stallone, Tessa Thompson (Thor: Ragnarok) will also be back, reprising her role as Biance.

Next post The Ugly Truth About Marvel: Why You Won’t See The Defenders in INFINITY WAR